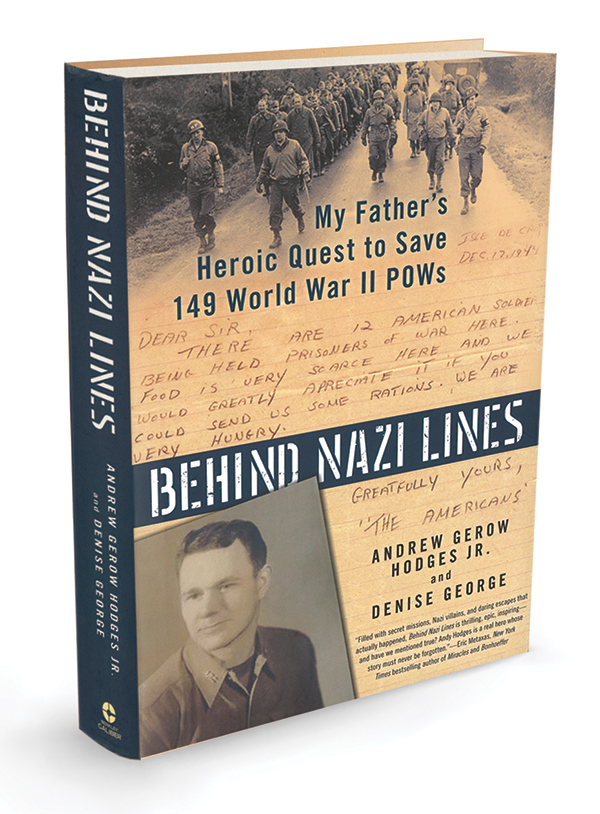 The story of the late Samford University alumnus Andrew Gerow Hodges’ heroism in World War II has been chronicled various times, including in a film documentary, but never in book form. Until now.

The book tells how the 1942 Samford graduate matched wits against the Nazi war machine to negotiate the release of Allied soldiers from prisoner of war camps in occupied France. It is a story of courage, determination and the importance that one person can have.

In researching for the book, Hodges encountered details he had not heard his father share.

“I saw how much drama was in the story and I saw my dad in a new way. I thought about my father and when he got the POW letter,” said Hodges, referring to a brief handwritten plea for help that local villagers smuggled out.

The note ultimately reached Allied officials who tapped Hodges to deliver needed supplies to the starving POWs. He later facilitated four prisoner exchanges that resulted in the liberation of 149 soldiers.

“My father made 15 trips through enemy lines by himself in a jeep. He came very close to getting shot,” said Hodges. “Dressed in a military-type uniform, he looked very much like a member of the military and could easily have been mistaken for a soldier.”

The elder Hodges joined the American Red Cross after a shoulder injury from his Samford football days kept him from military service. When he departed Birmingham for duty, he left behind his young wife, Mary Louise Shirley Hodges ‘43, and a toddler son, Gerry. The couple later had a second son, Gregory.

“Mother was a big help with the book,” Hodges said, citing her scrapbook and collection of love letters that his dad had written to her during the war. The book is dedicated to her.

After the Red Cross worker returned home in 1946, he rose to executive vice president with Liberty National Life Insurance Company and served as a member of the Samford board of trustees from 1962 until his death in 2005. He was chairman of the board in the early 1990s.

In November 2014, French citizens honored the 70th anniversary of his heroic actions by dedicating a plaque in his honor and naming a roundabout for him near Pornic, France, at the site of the second prisoner exchange.

A psychiatrist in private practice in Birmingham and the author of six other books on a variety of topics, Gerry Hodges was assisted on Behind Nazi Lines by Birmingham author Denise George.

“She blended the drama and made it flow,” he said of George, who helped put the story into a readable, narrative, nonfiction form. He also credits family friend and Samford board of trustee member H. Hobart Grooms Jr. with facilitating research and interest in the project.

The book portrays Hodges as a skilled and determined negotiator. In tense negotiations for the release of British soldier Michael Foot, Hodges convinced his adversaries to accept the release of one German soldier instead of five in exchange for Foot. “Dad said he was not going to leave without his man,” said Hodges. The episode was the subject of a 2002 video, For One English Officer.

Hodges and his father met many of the former POWs at a reunion hosted by Samford in 2002. “The reunion recreated the moment of their freedom, which was a happy moment,” he said, adding that few of the POWS had ever met his dad. “One man came up to dad and said he had been waiting 55 years to shake his hand,” Hodges said.

The book is available on amazon.com and at many major book dealers.