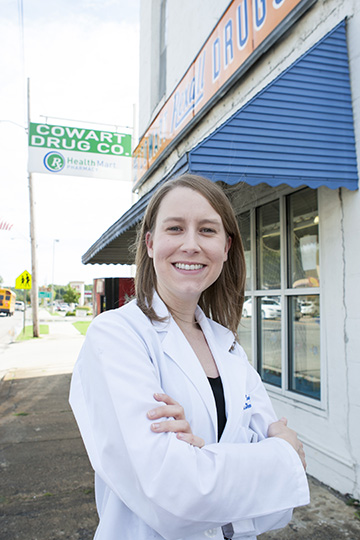 Four years later, White is fulfilling the scholarship’s vision and her childhood dreams.

She owns Cowart Drugs, a 96-year-old independent pharmacy in Calera, Alabama, that White’s family had patronized throughout her life and that she’d worked in since age 15.

“Everything worked out perfectly,” White said. “Just about the time I was planning to graduate, the owner of the pharmacy was getting ready to retire.”

It was an opportunity long in the making. As part of a long-ago school project about her career dreams, White interviewed Cowart’s previous owner, Theresa Harris. Harris offered that day to hire White when she was old enough to work. As a result, White went to work for Cowart Drugs as a cashier before she could drive, and she continued to work there during her college summers and holidays. Before White had even been accepted to pharmacy school, Harris asked whether she’d be interested in buying Cowart Drugs.

“She didn’t want it sold to a chain, and she wanted to keep a local person to take over,” White said. “She had other opportunities to sell the store before I finished up with pharmacy school, but she knew I wanted this so bad. She waited until I finished to sell it.”

White’s dream got a boost from McWhorter School of Pharmacy’s inaugural scholarship from Cardinal Health of Ohio, a Fortune 500 health care services company that distributes pharmaceuticals and medical products. The scholarship supported her senior year of study and also provided mentoring resources.

After graduating in 2013, White worked alongside Harris for a year, and then bought the business — a time she describes as both satisfying and intense.

“It doesn’t matter how long you’ve worked in a pharmacy before. That first day you’re by yourself is like, ‘Wow, this is real,’” White said. “However, it’s one of the greatest feelings because you have worked so hard for that day.”

Since buying Cowart Drugs two years ago, White has made small improvements and continued to build relationships with customers, a number of whom have known her for years. She is humbled that “they ask for me personally and miss me when I’m not there.”

Still, her time at Cowart Drugs has not been without challenges.

“The first year was definitely hard, not so much with the pharmacy part of it, but mostly the business side,” she said. “I’m still learning more about the business side each day. . . . Nowadays, you have to offer other services to your customers to bring in revenue, because dispensing alone won’t get it anymore.”

She remains involved in the Cardinal Scholarship program, serving on the selection committee and encouraging interested students to apply.

As for her own plans, White doesn’t rule out opening another store. But for now, she is happy where she is, which is where she always wanted to be. “I’ve been more blessed than I ever thought possible,” White said.