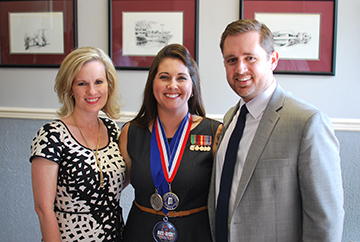 Erin Georgia will enroll at Samford University this fall with a string of accomplishments to her credit.

The most recent: Selection as one of the top 20 community college students in the nation as a member of the 2016 Community College USA Today All-Academic Team. The competition included 1,900 nominees from more than 1,000 community colleges across the U.S. on the basis of grades, leadership, activities and contributions outside the classroom.

Georgia, who has maintained a 4.0 grade point average at Jefferson State Community College, is a decorated veteran and former sergeant in the U.S. Marine Corps. She is also a wife and mother of three who enrolled in college after military service that included deployments to Iraq in 2003 and the Middle East in 2005.

“I always said that when my youngest went to school, so would I,” said Georgia, who first enrolled at Jefferson State in its culinary program, but with no specific professional ambitions. Within a few months, however, she felt called into ministry and changed her course of study to one that would support that goal. She will complete her Associate of Arts degree at Jefferson State in August.

The Trussville, Alabama, resident now looks forward to the next chapter in her academic journey.

At Samford, she will pursue a bachelor’s degree in organizational leadership through evening and online courses in the professional studies program.

“I wanted a degree that would help me in working in ministry, and this program suited me best,” said Georgia, a candidate for ministry in the United Methodist Church. She hopes later to earn a master’s degree in divinity.

She chose Samford, Georgia said, because of the ease in transferring her credits from Jefferson State. For the past year or so, she has consulted with Samford Professional Studies Associate Director Bryan Gill to ensure a smooth academic transfer.

“We are very pleased that Erin has chosen Samford University to continue her undergraduate education,” said Marci S. Johns, director of Samford’s professional studies programs. “She is an exceptional student who demonstrates overwhelming ambition, a dedication to academic excellence and a spiritual maturity that will no doubt benefit the Samford community as a whole.”

Georgia and the other USA Today Community College all-Academic Team members were recognized at a breakfast during the American Association of Community Colleges Convention in April in Chicago, Illinois. Each honoree received a $5,000 scholarship.

More recently, Jefferson State honored her at a reception on July 20. That event included presentation of a commendation letter from Alabama Governor Robert Bentley, and resolutions from the Alabama State Senate and House of Representatives.

In addition to the All-USA Team, Georgia was named Alabama’s Coca-Cola New Century Scholar. The program awards a scholarship to one student from each state with the highest All-USA Community College Academic Team application score.