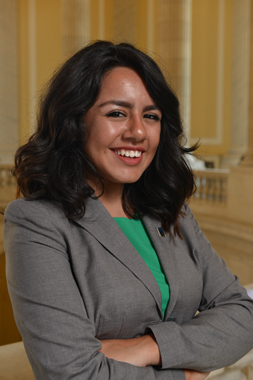 Herrera, who studies in the political science department’s international relations concentration, is one of only 38 CHCI interns chosen from hundreds of applicants throughout the country to work in the nation’s capital for eight weeks, where she was placed at the Office of Rep. Raul Grijalva (D-AZ).

“Being around other young Latinos who are passionate about not only education and their own progress, but who also have a deep sense of responsibility for others like them, their communities, and future generations, has been an emotional and truly awakening experience,” Herrera said. “In the congressional office and in Friday programming, I have had a sounding board comprised of talented individuals with unique struggles and different professional timelines.”