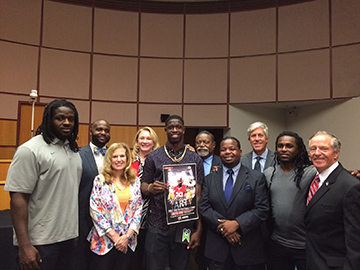 Current San Francisco 49er and 2014 Samford University graduate Jaquiski Tartt teamed up with Next Level Football Camp recently for the inaugural camp in his hometown of Mobile, Alabama.

Next Level is a coalition of former NCAA athletes who influence at-risk Alabama youth to help them make better life choices and to go to the “next level” in life. In addition to Tartt, his fellow Samford teammate and former NFL player Jeremy Towns is heavily involved in the Next Level project, including a July 15 camp in Birmingham.

Tartt also was honored by the city of Mobile and was presented with the Key to the City by Colby Cooper, chief of staff to the mayor of Mobile, for his dedication to creating opportunities for the local youth.

Tartt made the camp 100% free to 150 local kids. Camp not only focused on the football fundamentals, but also off-the-field issues as well such as the importance of school, nutrition, and saying no to drugs and alcohol. The goal of the camp is to allow one day of football training to impact the other 364 days of the year by participants being partnered with a mentor/coach from the camp. Tartt’s faith, focus on family, hard work and dedication have been instrumental in his personal success, and he hopes to share that with the campers.

“I have been blessed with great opportunities, and I want to repay that favor to those children and let them know somebody does care,” Tartt said. “We have a lot of kids here in Mobile that deserve to have someone to look up to. I want to teach them the things that helped me get where I am now, like the importance of work, education, work ethic and faith while having fun. I’m excited to be partnering up with Next Level and hope this will be the first of many.”

“Jaquiski Tartt is a true role model for the children of Mobile,” Cooper said. “The mayor’s office is proud to partner with him to develop programs and opportunities that positively impact our youth. His Next Level Football Camp was awesome and put into motion the impact he can have on children’s lives in his hometown. The city of Mobile is committed and proud to support his effort to give back to the city he calls home.”

Tartt was All-Southern Conference and All-American during his Samford playing days before graduating in December 2014. He was the first Samford Bulldog selected to play in the annual Senior Bowl game in Mobile and was selected in the second round of the 2015 NFL draft by the 49ers, the highest Samford player ever drafted.

“It’s very humbling to be able to come back to my hometown and be honored with the key to the city,” said Tartt. “I’m just so thankful, so blessed to be here to be able to do this. If anybody would have told me 4–5 years ago I would be getting a key to the city of Mobile, I’d have thought they were crazy. It’s a wonderful feeling. It’s probably one of best achievements or awards I’ve ever received in my life.”