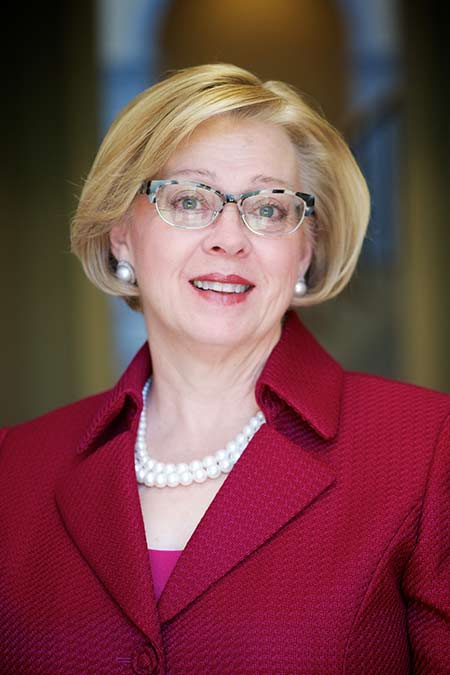 Nena F. Sanders, vice provost of Samford University’s College of Health Sciences, and Ida V. Moffett School of Nursing dean and professor, has been selected for induction as a fellow in the American Academy of Nursing.

Sanders is recognized for her significant impact on the practice and education of nurses and the delivery of health care, according to AAN officials. She is one of 164 leaders worldwide chosen for the 2016 class of fellows. She will be recognized during the academy’s annual conference Oct. 22 in Washington, D.C.

“I am overwhelmed and honored to be inducted as a Fellow in the American Academy of Nursing,” Sanders said. “I am humbled to be among the more than 2,400 extraordinary nurse leaders who have been recognized for their professional accomplishments, and the significant contributions they have made to the nursing profession and patient care. As a Fellow, I am committed to continuing to using my voice to positively impact nursing education and practice, health policy and patient care outcomes.“

“Dr. Sanders is a transformational leader in nursing administration, education and consulting, and it is no surprise that she would be selected for this special international recognition in the nursing profession,” he said. “It is a high honor for her and for Samford University to be recognized by her peers for her leadership and work in improving health care education and services.”

Throughout her more than 35-year career as a health-care consultant, administrator and educator, Sanders has integrated her expertise academically and experientially to positively impact health-care systems, the practice of nursing and patient care. She has earned national and international recognition for her unique ability to creatively align the education and practice of nurses with the demands of the ever-evolving health-care system.

The impact of Sanders’ work is evidenced by numerous innovations in nursing practice and education and the development of models of health-care delivery that have been implemented nationally and internationally.

Sanders served as project director for a landmark study funded by the U.S. Department of Health and Human Services designed to respond to cost management changes in nursing practice and to determine the knowledge and skills nurses needed to practice in a cost-conscious environment. The outcome of that study served as the foundation for educational programs nationwide and a national white paper. Concurrently, she served as coordinator of the first and nation’s largest interdisciplinary nursing administration program.

“I saw firsthand the value of interdisciplinary education and the need for more financially savvy nurse administrators,” said Sanders. “This led to revisions to the nurse administration curriculum that focused on finance, strategic management, interprofessional practice and patient care outcomes. The program produced hundreds of graduates who continue to serve in executive leadership positions across the United States and around the World.”

In 2001, Sanders was named dean of Samford’s Ida V. Moffett School of Nursing. Under her leadership, the school has experienced transformational growth in enrollment and programs offered, and has earned numerous national accolades and rankings. In 2013, Sanders was appointed vice provost of Samford’s new College of Health Sciences, where she utilizes her spirit for innovation to positively impact the education and practice of health-care providers across more than 30 disciplines in the schools of health professions, nursing, pharmacy and public health.

Sanders is also actively involved in a number of health-care initiatives that focus on improving patient outcomes, reducing health-care costs and improving access to care. She is a founding member of the Alabama Health Action Coalition, a driving force for transforming health-care and nursing practice in Alabama. Currently, she is also the only nurse in Alabama holding a health system board appointment, a role that provides her a significant voice in influencing health-care policy decisions.