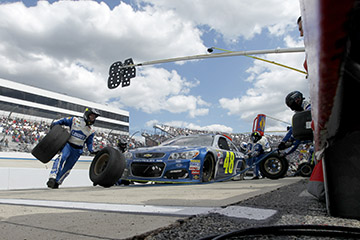 If you had asked alumnus R. J. Barnette 10 years ago where he would be today, his answer would have been simple. “I thought I would be coaching high school sports somewhere,” he said. Instead, most weekends, you can find the former Samford defensive back and Class of 2009 alumnus on pit road, serving as the front tire carrier for Jimmie Johnson’s team.

“I never imagined this is what I would be doing,” said Barnette. “I travel the country for a living, I work with the best in my sport — I even had lunch at the White House. I am surprised that I’ve made it to the peak of my sport. The #48 team will go down in history as one of the best of all time, and I’m thankful to be a part of it.”

Barnette can trace the start of his NASCAR career back to a single conversation with Alan Jung, who was chair of the Department of Kinesiology at the time. Jung, who is now dean of Samford’s School of Health Professions, asked him a simple question, “What are you passionate about?”

“I had planned to say something about kids and coaching. Instead, somehow NASCAR just came out,” he said. “That one word in my conversation with Dr. Jung changed my life.”

Jung knew a strength and conditioning coach at Hendrick Motorsports, and he helped arrange an internship for Barnette. Following his internship, Barnette returned to Samford to complete his degree, but the experience confirmed what he already knew: his career path was changing.

After graduation, Barnette moved to Charlotte. “The economy had recently tanked, and no one was hiring. I moved with no job and no guarantee of a job. I even lived out of my car for a short while. But, none of that mattered; I knew it was what I was supposed to do,” said Barnette.

“For six months, I went to every race shop in town, and no one would hire me. Finally, in July 2009, I was hired by Hendrick Motorsports. This is my seventh year on the team.”

Barnette grew up going to the races at Talladega Superspeedway, so it is fitting that his first cup race and first win were there. “Every time we drive in, I see that section where we sat when I was a kid. Never could I have imagined that the sport would one day pay my bills,” he said.

When asked what advice he would give students who are seeking careers in sports, he quickly answered, “You have to be willing to put in the time. You will put in a lot of work that other people won’t see, and you have to be okay with that.”

Barnette is confident that Samford provided him with many of the tools necessary to succeed in this career. “I work with hundreds of people, most of whom are college graduates,” he said. “It’s incredible to see just how well prepared I am. Because of Samford, I am able to effectively work with others from all backgrounds and in different settings.”

Rachel Sharpe ’08 has spent five seasons as the staff athletic trainer for the University of South Carolina football team. Prior to this position, she served as a graduate assistant for USC football, a preseason intern with the Tennessee Titans and head athletic trainer for W. J. Keenan High School in Columbia, South Carolina. In 2015, Sharpe was highlighted by Southern Living magazine as one of four “Women Who Make Game Day Happen.” When asked what she enjoys most about her career, the answer was clear — the relationships and the variety. “I get the opportunity to know the real guy — not just the player as he is portrayed by the media or superficially as just a regular fan. My days never look the same, and every day brings something completely new,” Sharpe said.

Once former Samford athlete Alvin Hines ’13 settled on a major in sport administration, he quickly found his passion for the administrative and business side of sports. Following graduation, he served as the administrative fellow with the American Athletic Conference in Providence, Rhode Island, where he worked with the inaugural men’s and women’s basketball championships and 13 Olympic sport championships. He went on to serve as team operations intern for the College Football Playoff, where he assisted with the planning and execution of all events and operations associated with the 2016 CFP National Championship. “I was thrilled to be a part of an elite staff that runs arguably the biggest game in the collegiate realm,” Hines said. Upon completion of the internship, Hines accepted his position with the University of Missouri. “Whether it’s providing a great championship experience or raising money, I enjoy being in a position to serve student-athletes and provide the best student-athlete experience while preserving the integrity of the sports.”