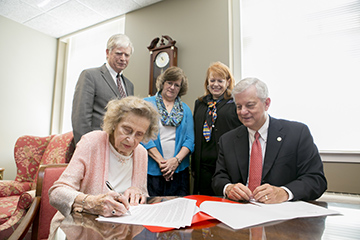 When John and Fran Carter joined the faculty of Samford University in 1956 in what is now Orlean Bullard Beeson School of Education, they became widely known on campus as “Dr. John” and “Dr. Frances.” Their illustrious careers have now been enshrined at Samford with the John and Fran Carter Endowed Scholarship for Teacher Education. The scholarship was established by Fran Tunnel Carter and donors who gave in memory of John, who died in March of 2014.

During her 28 years on Samford’s faculty, Frances taught both education and home economics, and established the early childhood education major for Samford students.

John taught secondary education and served as dean of the school from 1980 to 1986. He initiated a series of annual summer workshops at Samford, making it possible for hundreds of practicing teachers to earn professional development credit in phonics, aerospace education, patriotism, kindergarten and other topics.

“All of the scholarships the Carters have given are important to me and to the school,” said education dean Jean Box. “Through the giving of the Carters, students who are earning teaching degrees that prepare them to teach in grades preschool through high school can be better equipped to attain their goal. John and Frances Carter will forever touch the lives of children through their faithfulness and generosity.”

Together, they taught at Hong Kong Baptist University and Anhui Normal University in Wuhu, People’s Republic of China, on two sabbatical leaves.

After retirement, the Carters annually led teams of American teachers to conduct workshops for teachers in China. They collected and shipped English books to schools in several other countries through the International Book Project at Samford, prompting Anhui Normal University to open the Samford University Reading Room on its campus, and the Carters to build a library/community center for the Marla H. Corts Mission School in Liberia. For 17 years, John led the Christian Corresponders letter-writing project, matching more than 20,000 American Christian young people with Chinese students.

John was instrumental in beginning the Samford Retired Faculty Association and the Fellowship of Baptist Educators, serving as its national president and then executive director. Frances served as national executive director of Kappa Delta Epsilon educational fraternity for 15 years and was president of the National League of American Pen Women.

The Carters participated in numerous international mission trips, taught Sunday school and Bible study for most of their adult lives, wrote books and denominational curriculum for the Southern Baptist Convention for 25 years, and taught Conversational English through their church, Dawson Memorial Baptist Church.

In addition to their many contributions to education at home and abroad, the Carters were recognized for their military service. As a World War II U.S. Army paratrooper, John earned five battle stars and bronze arrowhead, landing in the invasion of southern France in a glider plane and participating in the Battle of the Bulge. Frances founded the Rosie the Riveter Association in 1998 to recognize and preserve the history and legacy of working women during WWII. Together, the Carters presented more than 250 programs nationwide as “Rosie the Riveter and her WWII paratrooper.”