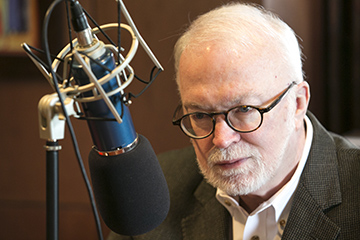 Beeson Divinity School marked a milestone Tuesday, Aug. 9, celebrating its 300th episode of the Beeson Podcast. This landmark episode features an interview Dean Timothy George conducted with Rebekah Naylor, a Baptist surgeon who served for 30 years as a medical missionary in Bangalore, India.

The Beeson Podcast, which began in 2010, is the vision of Dean George, who wanted a way to extend the ministry of the divinity school beyond its walls and especially to connect with its alumni. The first episode aired on Oct. 26 featuring an interview with the late Charles “Chuck” Colson.

“We began with just a handful of listeners,” George said. “Now each new episode attracts about a thousand listens in its first week. It is a joy to hear from podcast listeners who tell us how encouraging they find this ministry.”

Once a month, George and Robert Smith Jr., the Charles T. Carter Baptist Chair of Divinity, introduce a sermon as part of the podcast’s “Great Preachers Past and Present” series. Over the years, the podcast has highlighted some of the best sermons given by divinity students and faculty to homiletic masters from the past, including Elizabeth Achtemeier, W. A. Criswell, Harry Emerson Fosdick, Oswald Hoffmann, Martin Luther King Jr. and James Stewart.

Listen to the Beeson Podcast here or subscribe to it on iTunes.