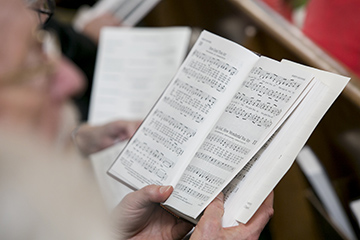 Samford University employees were urged to do justice, love mercy and walk humbly with their God during a community worship Monday, Aug. 22.

Through scripture, spoken reflections and musical interludes, participants were able to prayerfully start a week of beginnings that will include the arrival of more than 900 new students on Friday.

Samford president Andrew Westmoreland welcomed the crowd with prayer and recognition that for some individuals, their “to-do lists may still be longer than their done lists.”

Adams said she was addressing the “justice” aspect of the passage from Micah 6:8 as the parent of a son who will be a Samford junior this fall.

“We are being trusted to teach and train our young people to do justice,” said Adams.

She complimented colleagues for helping her to help her son rise to his responsibilities during his freshman year. “That was justice,” said Adams, assistant dean of Samford’s Cumberland School of Law and director of the law school’s Public Interest Program and Community Mediation Center.

Acknowledging a troubling campus event in May, she said that justice starts individually. “We have the intellect and ability to correct ourselves. Let’s be courageous and bold. Let’s get it done, and do justice,” Adams said.

“God has gifted us the opportunity to teach and train these young minds that are looking to us to help them go out and make a difference. What we do is important.”

Nanni, director of community engagement at Samford’s Mann Center for Ethics and Leadership, spoke on the directive to “love mercy.”

She noted that this summer has been one of violence and killings. “Mercy goes beyond praying for an end to violence or making donations of money and food,” she said, but requires individuals to weather some discontent as they seek to change a system that marginalizes those who are suffering. “I’ve learned to get comfortable with discomfort.”

That the passage says the Lord “requires” us to love mercy “is not a suggestion,” she said, stressing the importance of proximity and providing opportunities for students to “get close and keep close” to the most vulnerable.

Stokes showed several family heirloom pieces, including a well-worn Bible used by his grandmother, to stress that old things can teach lessons on how to “walk humbly.”

“We must listen carefully to the past to walk humbly into the future,” the sociology professor said. “To humble ourselves involves embracing the old. We need the past to face the daunting issues of the future,” he said, adding that the words of Jesus Christ are as disturbing and piercing today as they were 2,000 years ago.

The admonition to love your enemy, for example, can be challenging. “But we need not walk it alone,” he said, encouraging the audience to “walk with God and with each other.”

“I am grateful to walk it with you and our students as we begin a new semester,” he said.

Upon entering Reid Chapel, each audience member received a card with the names of 10 fellow employees and incoming students. During a prayer time led by worship coordinator Matt Kerlin, each person voiced aloud those names simultaneously with others.