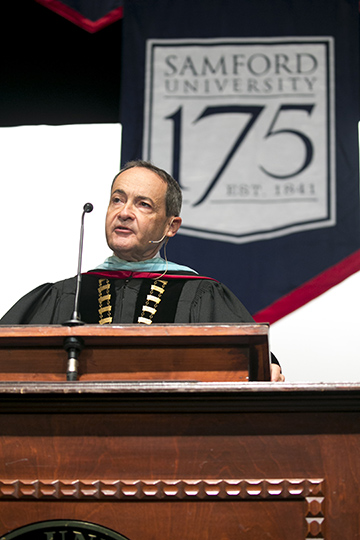 “We give thanks for those who built and sustained this institution,” said Samford President Andrew Westmoreland, referencing the Alabama Baptist pastors and laypeople who first had the idea to form Howard College in Marion, Alabama in 1841.

The college underwent much growth, several relocations and a name change to become Samford University, he noted.

Westmoreland cited a favorite line from William Faulkner that differentiates between monuments and footprints to encourage students to make the most of their college years.

“A monument says  ‘I got this far,’ but a footprint says ‘This is where I was when I moved again,’” Westmoreland said. “Footprints are more significant. They indicate that we were here, but we are headed somewhere else to use what we gained here.”

Westmoreland used the anniversary numbers one, seven and five to make several points.

“You are one person, unique in the history of the world.  One person, called to do something,” he said before illustrating the influence that one person can have. The late Bob Riley, Westmoreland said, was almost killed in World War II but survived to earn bachelor’s, master’s and doctoral degrees, and become his college professor and mentor.

“He was one person, but I would not be here if not for him. He was uniquely qualified to do what he did,” Westmoreland said, suggesting that students search out their own calling and prepare for it.

The number seven represents the continents on the globe to which Christ followers are called, Westmoreland said, telling of four Samford students who spent four months last spring on an island off the coast of Greece ministering to refugees from Syria and other lands.

“We are called to do things throughout the world, and sometimes that world is our neighborhood,” he said. “God’s world. Our world.”

The number five represents the senses that inform perceptions: taste, smell, hearing, sight and touch, each of which can be imperfect.

“We need help informing our sensory perceptions,” said Westmoreland. “That’s one reason we come to a place like Samford. Through the wisdom that we gain, our perceptions are clarified, and our senses are enriched.”

He noted that the footprints of Samford  people will always be on campus and also beyond it.

“If we are faithful about our footprints, we don’t need to worry about the monuments,” he concluded.

Special music included the choir and congregational singing of “Holding the Truth,” which was selected in a Samford Sesquicentennial hymn writing competition on the occasion of the school’s 150th anniversary. The hymn features text by Esther Burroughs and music by Bob Burroughs. The couple served on the Samford faculty in the 1970s.