William Nunnelley to be Samford JMC Wall of Fame Inductee 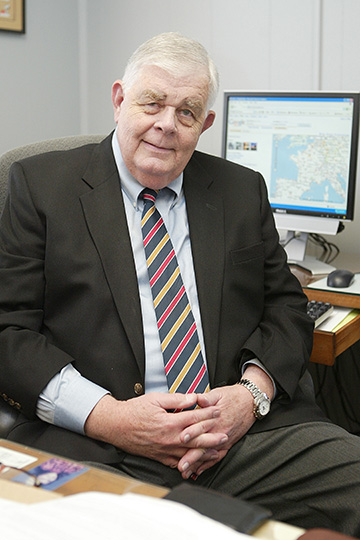 Longtime employee and veteran journalist William A. “Bill” Nunnelley is the 2016 inductee on the Wall of Fame for Samford University’s Department of Journalism and Mass Communication.

The induction ceremony is Nov. 12 at 11:15 a.m. during Samford’ annual homecoming weekend.

Nunnelley received two degrees from Samford and joined the university staff in 1964. He currently serves as the senior editor and director of public relations in the Division of Marketing and Communication. He is also the editor of Seasons, Samford’s news magazine, a position he has held since the publication’s inception in 1984. His Samford career includes several communications-related roles, including a stint as sports information director and the original director of the community education program formerly known as Samford After Sundown.

Nunnelley received the President’s Award in 2013 for his outstanding service to the university. His work has been recognized nationally by the Council for Advancement and Support of Education, the Baptist Communicators Association and the Religion Communications Council, among other organizations.

A longtime accredited member of the Public Relations Society of America, Nunnelley has published two books centered on the Civil Rights Era in Alabama. His book, Bull Connor, was honored as an Outstanding Book by the Gustavus Myers Center for the Study of Human Rights in the United States in 1992.

“JMC’s advisory council recognized Bill’s outstanding career in communication and strongly felt that he needed to be inducted into the Wall of Fame,” said Bernie Ankney. “I first met Bill shortly after I became chair of JMC in August 2006. I was immediately impressed by his outstanding skills as a writer and editor for Seasons. I was also impressed by his love and dedication to Samford University. He is a terrific ambassador for the university and the JMC department.”

Nunnelley credits his Samford education for forming a strong foundation of editorial knowledge. “The news writing and feature writing classes taught me the basics in these areas,” said Nunnelley. “I have used these skills over the years and continue to do so.”

Nunnelley will be the 17th inductee into the JMC Wall of Fame. His wife, Carol, was one of the three inaugural inductees in 2009.

“The induction is a distinct honor,” said Nunnelley. “I have great respect for those who were inducted previously, and to be included there is very gratifying.”

Jackie Long is recruitment and alumni coordinator for the Department of Journalism and Mass Communication.