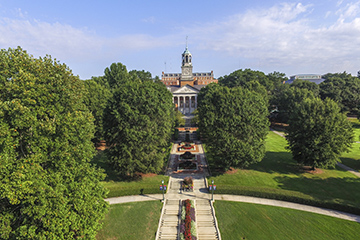 Samford University’s nationally ranked Department of Journalism and Mass Communication (JMC) will award partial scholarships to as many as 12 freshmen who enroll in the fall of 2017. The application deadline is Feb. 15, 2017, and each scholarship is worth up to $2,000 per year.

Scholarships will be awarded based on ACT scores, high school grades, volunteer work, school or community leadership, and participation in media-related clubs. The scholarship can be renewed each year that the student maintains a 3.5 or better GPA and is involved with Samford student media.

“Our scholarships can provide $8,000 in financial assistance during a student’s time in Samford JMC,” said Samford JMC chair Bernie Ankney. “This can help students receive an outstanding education in journalism and mass communication at a reasonable cost. Samford offers one of the best value journalism programs at a private university in the United States.”

About Samford University -- Samford University is Alabama’s top-ranked private university and one of the nation’s top Christian universities. U.S. News & World Report ranks Samford 4th among regional universities in the South, and the university is widely acknowledged as a leader in liberal arts and professional school education. Located in suburban Birmingham, Samford was founded in 1841 and is the 87th-oldest institution of higher learning in the United States. Samford enrolls 5,471 students from 47 states and 29 countries in its 10 academic units: arts, arts and sciences, business, divinity, education, health professions, law, nursing, pharmacy, and public health. Samford also fields 17 NCAA Division I teams that compete in the tradition-rich Southern Conference. www.samford.edu