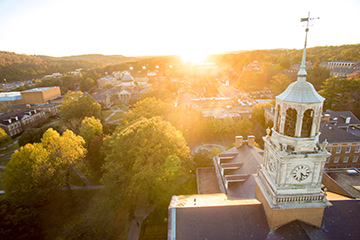 Samford University’s strong reputation as a nationally recognized private Christian university is affirmed in the latest U.S. News & World Report college rankings. Samford is 4th in the South among regional universities in the 2017 rankings released Sept. 13.  Samford is the highest ranked university in Alabama in any classification and continues a three-decade tradition of being ranked in the top tier of its peer group.

Samford also is ranked 3rd in the South for “A Strong Commitment to Teaching." According to U.S. News officials, these are schools where “the faculty has an unusually strong commitment to undergraduate teaching.”

Samford Provost J. Michael Hardin especially praised the Samford faculty for this particular ranking. “Because we are committed to having all classes taught by full-time faculty or highly qualified adjunct instructors, it allows Samford to place special focus on teaching,” he said. “This particular ranking affirms the important role that our faculty place on providing rigorous and high-quality classroom instruction and advisement.”

The rankings are based on the Carnegie Foundation for the Advancement of Teaching classifications, and assess such criteria as academic reputation, graduation and retention rates, class size, and faculty/student ratios. Peer assessments from presidents, provosts and chief admission officers of institutions in the same classification also are used to determine the rankings.

Samford also has the highest graduation rates of any higher education institution in Alabama, Hardin added.

In addition to the other rankings, Samford's Brock School of Business was recognized as one of the best undergraduate business programs among all national business schools accredited by the Association to Advance Collegiate Schools of Business (AACSB).

Samford also was ranked 4th in the South for Best Colleges for Veterans. In July 2015, the university received a $1 million grant from the U.S. Department of Health and Human Services’ Health Resources and Services Administration to fund a program to help veterans pursue degrees in nursing.

The latest U.S. News rankings continue a trend of high rankings for Samford’s academic programs and value. In late 2015, The Economist ranked Samford 87th nationally, and Samford has been nationally recognized for quality and value by other organizations such as Forbes, The Princeton Review and Kiplinger’s Personal Finance.

Samford President Andrew Westmoreland noted that the high rankings come at a time of “strong growth” for Samford. Earlier, Samford had announced the eighth consecutive year of record enrollment with 5,471 undergraduate and graduate/professional students enrolled.

“National rankings are just one important measure of our success,” Westmoreland added, “but they continue to affirm Samford’s growing national reputation for providing rigorous academic programs rooted in our Christian mission.”