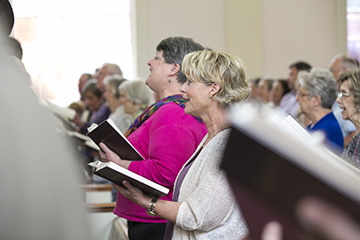 The annual Samford University Hymn Sing has become a beloved tradition in the community. The hymn sing is the spiritual culmination of Samford’s Family Weekend festivities, sharing favorite hymns with family and friends.

“Singing in Heaven!” is the theme for the 13th annual Samford Hymn Sing Sunday, Oct. 2. The program begins at 2 p.m. in Samford’s Reid Chapel, and is under the musical leadership of Eric Mathis, assistant professor of music and worship.

Sharing in the direction will be Don Wyrtzen. Known as the “poet of the piano,” Wyrtzen is recognized as one of the leading musicians and statesmen in Christian music. His accompaniment will be the perfect addition to Samford’s sing along, Mathis said.

The Hymn Sing began in 2003 as the Samford Auxiliary’s (now Legacy League) opening program of the year. It featured the music of composer Philip Paul Bliss, who had been described as “one of God’s gifts to modern Christian music,” and was directed by legendary gospel musician Dick Baker of Dallas, Texas. The program was so popular that it has become a Samford tradition and the closing event of the annual Family Weekend.

“These songs — gospel songs — are the songs of my childhood, and they are deeply engrained in my consciousness,” said Samford President Andrew Westmoreland. “I’m grateful for those among us who preserve that heritage. I’m grateful that the music lives in our hearts.”

Mathis said guests are invited to arrive on campus early and enjoy lunch in the University Dining Hall before walking over to Reid Chapel for the Hymn Sing. Cost of lunch is $8.40 per person.