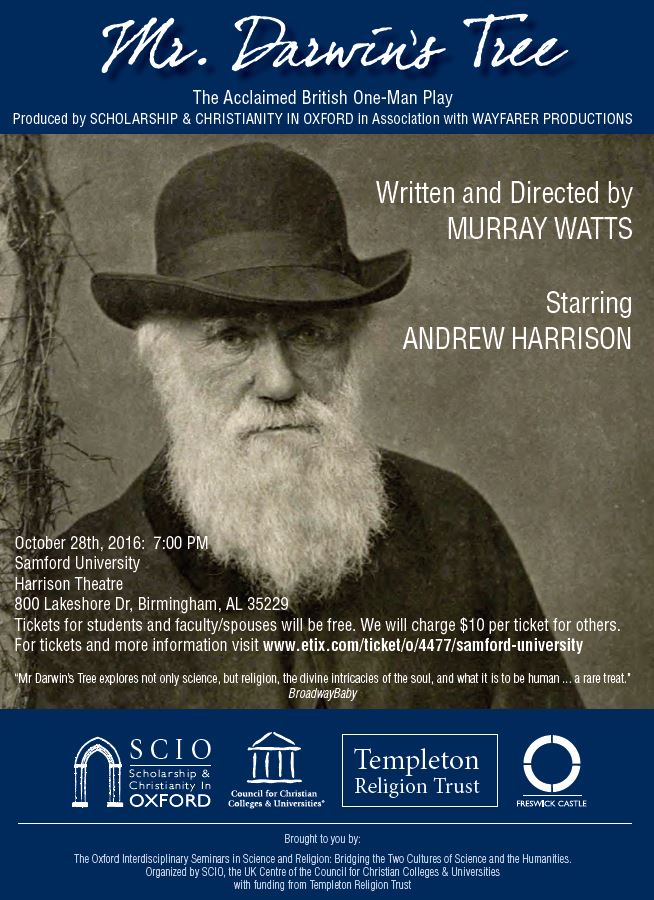 Samford University will host the acclaimed British one-man play, Mr. Darwin’s Tree, Friday Oct. 28, at 7 p.m. in Harrison Theatre. The play explores the life and work of Charles Darwin and his impact on science and religion.

The professional production, written by Murray Watts and acted by Andrew Harrison, premiered at Westminster Abbey and has been performed at the Edinburgh Festival, King’s Head Theatre in London, as well as at Oxford, Cambridge, St. Andrews, and many other universities, colleges, and theatres in the UK. The play toured the U.S. in spring, 2016, and is touring college campuses this fall.

The Samford performance (approximately 75 minutes) will be followed by a 30 minute panel discussion and Q&A with the audience. A reception will follow in the foyer of Harrison Theatre.

Tickets for Samford students, employees and spouses are free at the Samford box office (726-2853). All other tickets are $10 at the box office or online at https://www.etix.com/ticket/o/4477/samford-university.

Mr. Darwin’s Tree is sponsored by the Science and Religion Club, the Center for Science and Religion, and the Theatre Department. It is produced by Scholarship & Christianity In Oxford, the UK Centre of the Council for Christian Colleges & Universities, and underwritten by the Templeton Religion Trust.