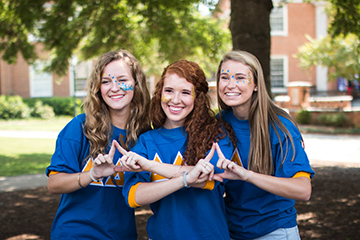 This fall, Samford University welcomed 57 new members of Delta Delta Delta sorority, the latest addition to the campus’ thriving greek life community. It is the first new sorority at Samford in about 20 years.

Breanna Bober, Tri Delta’s chapter development consultant, has been in Birmingham since August, working with Samford’s Office of Greek Life to establish the local chapter.

“I have loved the relationships that Tri Delta has built with the Greek Life Executive Boards and the different chapter presidents,” Bober said. “Everyone has been so welcoming, kind and supportive of Tri Delta and our endeavors.”

Tri Delta conducted its recruitment in mid-September, and Bober said the new members are excited about this opportunity and eager to be involved.

“They feel like they are truly a part of something greater than themselves,” she added.

Samford Director of Greek Life Julie Fletcher was impressed with Tri Delta’s recruitment, and she looks forward to its continuous integration into campus life.

“They’ve done a fantastic job,” Fletcher said. “They had a great recruitment, and I’m really proud of them.”

“Greek life is continuously thriving and growing,” Fletcher said. “Students are wanting to be involved and want connection, and they are looking for that through fraternity and sorority life.”

Fletcher said that the number of men interested in greek life who did not pledge also raises questions about adding another fraternity.

Fletcher noted, “Is it time to bring on another group? That’s a conversation that the men have started to have.”

Overall, about 50 percent of Samford’s undergraduate students are members of greek life organizations. Members contribute to the university in many ways and are much more than just social organizations, Fletcher emphasized. All organizations participate in multiple community service and philanthropic activities throughout the year, and provide educational forums to the campus on a variety of topics.

“The Office of Greek Life is committed to a quality fraternal experience encompassing service, leadership, scholarship and personal development within a Christian values collegiate community,” she said.