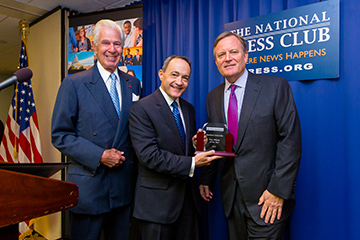 The Washington Center (TWC) for Internships and Academic Seminars recognized Samford University as New Affiliate of the Year at the recent 2016 Academic Affairs Awards Luncheon in Washington, D.C.

The New Affiliate of the Year award recognizes institutions that have built a strong foundation with TWC and hold great promise for the future. Since launching its partnership with TWC last year, Samford has already sent four students to take part in the academic internship program, including one participating this fall. Students going through this program spend a semester in Washington, D.C., completing a full-time internship and taking a weekly course, all while earning academic credit at Samford.

TWC works with a number of partners to provide students with a rewarding experience in Washington, D.C., from campus liaisons to private and public universities, faculty leaders and university systems. TWC’s president Chris Norton recognized the power of these affiliations.

“When you consider the terrific partners we have already recognized today, you can see that it is when we partner with others that we are at our best and we accomplish the most,” Norton said. “Without our college and university partners, we would not be able to do what we do.”

In accepting the award on behalf of the university, Samford President Andrew Westmoreland spoke of his own experiences at the Washington Center as a college undergraduate.

“I saw the great value of the experiences I had when I participated, and certainly those experiences have been magnified for students who participate today,” Westmoreland said. “We will look forward to a long association with the Washington Center.”

Austin Ferrer, a senior journalism and mass communication major at Samford, is currently in an internship at TWC.

The Washington Center for Internships and Academic Seminars is an independent, nonprofit organization that serves hundreds of colleges and universities in the United States and other countries by providing selected students challenging opportunities to work and learn in Washington, D.C., for academic credit. The largest program of its kind, the Washington Center has more than 50,000 alumni who have become leaders in numerous professions and nations around the world.

Lauren Womack Johnson, a 2011 Samford University graduate and marketing and communication manager for the Washington Center, assisted with reporting for this story.