Samford Student Researchers Take Their Work on the Road 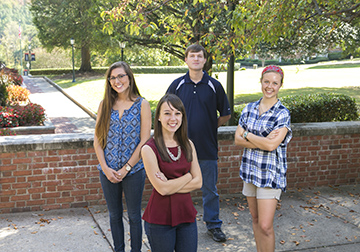 They are among about 100 students and faculty from the 10 Southern Conference institutions who will present research projects in all disciplines of the arts, humanities, science, technology, engineering and math.

“The event will be a valuable opportunity for undergraduates to gain worthwhile experience in presenting and explaining research they’ve performed in previous semesters and over the summer months,” said Samford Senior Associate Provost Tom Woolley.

The forum is hosted by Wofford College as part of the Southern Conference Academic Exchange, an initiative started in 2014 for member institutions to work collaboratively on academic-related matters.

Samford representatives and their topics are as follows:

Stephen Boutwell, a junior classics major from Helena, Alabama, “Freedom and vengeance: How late-period Egypt and the late classical Greek city-states mutually contributed to the decline and fall of the Persian Empire.” His research adviser is classics department chair Randy Todd.

Caroline Prieskorn, a senior nutrition and dietetics major from Texarkana, Texas, “The effects of coconut milk and beet puree on the nutritional, physical and sensory characteristics of raspberry ice cream.” Her research adviser is nutrition and dietetics professor Pat Terry, who will serve as Samford faculty representative at the forum.

In her project that she undertook for an experimental foods class, Prieskorn sought to increase the nutritional value of an ice cream recipe without decreasing flavor by adding beets and using coconut milk instead of heavy whipping cream.

And taste approval? “There was no significant difference in the acceptability of the two ice creams, which is exactly what we wanted, so this was super exciting,” Prieskorn said of the resulting fuchsia-colored treat.

The research was more involved than she expected, said Prieskorn, who spent many late nights in the foods lab trying different recipes, and many more late nights running statistical data and preparing her poster.

“Even though it was time consuming, it was so worth it,” she said. “I feel as though all my hard work has paid off.” Earlier this fall, she presented her work at a national nutrition conference in Boston, Massachusetts.

Researcher Ferrer examined more than 200 cartoons before narrowing them down to 27 for his senior thesis, which studies how political cartoons portrayed President George W. Bush before the events of Sept. 11, 2001, in the two years after the tragedy, and after the 2003 capture of Saddam Hussein.

“My research observes and discusses how depictions, stories and messages displayed in a variety of political cartoons directly correlated with President Bush’s approval ratings while in office,” explained Ferrer, who will use Powerpoint during his oral presentation.

“Having the opportunity to mesh my passion for politics with the skills and strategies I learned as a Samford journalism student made my senior thesis a challenging and exciting adventure,” he said.

“I am grateful for the professors who have prepared me for SURF. I look forward to representing Samford,” said Ferrer, who will take a break from a fall semester internship in Washington, D.C., to join the other presenters in South Carolina.

In his work as a congressional intern for Tennessee Congressman Chuck Fleischmann, Ferrer works with constituent correspondence, analyzes and researches policy issues, and conducts capitol tours for visitors from east Tennessee.