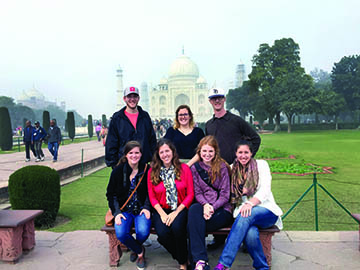 Preston Hite, associate professor of interior architecture in Samford’s School of the Arts, has combined a mission calling with an educational experience. A registered architect, Hite recalls that the idea grew out of his interview for a faculty position at Samford.

“I proposed an idea to expose students to mission work through their studies,” he said. “Dean Joseph Hopkins embraced this concept, and Design Education for World Impact [DEWI] is now moving into its third year as a senior thesis project for interior architecture students.”

According to Dean Hopkins, “Design Education for World Impact is a great example of how the School of the Arts is challenging students to integrate faith, talent and scholarship. This work is vaulting the Samford graduate into premier career opportunities and impacting the world through Christian service.”

Nathalie Roeling, a May 2015 graduate of the interior architecture program, now works at Davis Architects in Birmingham. Her enthusiasm for the experience demonstrates its powerful lasting impression.

“DEWI gave me a heart and meaning for my career path, and was the catalyst for my current position,” she said. “God revealed that my talents could be used to help others through the design of church and education facilities.”

A 2016 graduate of the program, Rebekah Mathews, said the program changed her mindset academically, spiritually and personally. “As I looked for a job my senior year, it became for a higher purpose,” she said. Not only did the curriculum change her perspective, but it also provided invaluable real-life training.

“The most valuable part of the project was that our work was no longer hypothetical and that we had the interaction with the community in India,” she explained.

The program’s first year took students to Ecuador, where they designed and renovated the main multipurpose assembly building of a large Ecuadorian church camp. Last year, the students designed and participated in the construction of a medical clinic in one of the poorest neighborhoods of Kolkata, India.

The thesis project will return to Ecuador during the 2016–17 academic year. Hite connected with local mission groups in both locations to identify needs and to help with logistical coordination. His vision for the future includes focusing on one mission area so that Samford can make a long-term impact in a community.

The DEWI program encompasses the entire senior year. Students spend the fall researching all aspects of the culture and building needs in the designated community. They then travel to the locations during January for a site visit, which allows them to adjust their design initiatives relative to the actual situation. Once they return to campus, the rush is on to design independently — and then collaboratively — to come up with the best plan.

The trip to India this summer included both graduating seniors and other students rising in the program. When they arrived at the site, construction was underway, but the structure was different from the intended design. The students learned to collaborate and implement changes in the field.

Anna Pinter, a 2016 graduate, said, “The whole experience was eye-opening not only on an educational level, but also on a Christian one.” She remembers the local entity asking them to “just build the structure, and it will serve its purpose.” This kind of faith is the cornerstone of the project for the students as well as for the local participants.

Hite believes the travel and on-site portion of the thesis is life-changing. He is aware of the intensity of the travel, and tries to balance the trip with some sightseeing and work with locals outside the project focus to help students acclimate to often difficult circumstances of the community.

Hite’s goal has been to offer clarity for students to see how they can make a difference with their talents. According to his students, mission accomplished.

Ashley Smith is coordinator of marketing and communication for the School of the Arts.