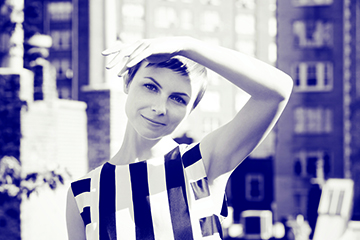 Kat Edmonson performs for the first time in Birmingham at Samford University’s Brock Recital Hall Nov. 3 and 4 as part of the Wright Center Signature Series.

Kenny Gannon, Wright Center director, said he booked Edmonson because he “wanted to take advantage of Birmingham’s love of jazz and bring new talent for the community to experience.” Gannon added, “Kat’s sound is very sophisticated and unique. I have become a huge fan since learning about her work.”

Edmonson is a critically acclaimed, vintage-pop and jazz vocalist, Gannon said, and her voice is reminiscent of the golden age of Peggy Lee and Blossom Dearie. She effortlessly captures the essence of old cinema and the Great American Songbook; this resonance combined with Texan roots and a bright spirit define her as one of the great jazz artists of today.

In 2009, Edmonson released her debut album, Take to the Sky, which features her ethereal cover of “Summertime” and hit Top 20 on the Billboard Jazz Chart. She recorded her second album, Way Down Low, at Avatar and Capitol Studios with engineers Al Schmitt (Frank Sinatra, Neil Young) and Phil Ramone (Billy Joel, Paul Simon). Her first album comprising all original music, Way Down Low features Edmonson’s hit single “Lucky,” which earned her spots on NPR’s All Things Considered as well as Austin City Limits Live.

Edmonson appeared in Woody Allen’s 1930s inspired film Café Society as a jazz singer. She is highlighted on the official soundtrack with her cover of “Mountain Greenery.” Edmonson’s return to her jazz roots coincides with her fourth studio album, to be released in 2017.

About Samford Arts — Samford plays an important role in Birmingham’s art community by partnering with local arts organizations, including the Alabama Symphony Orchestra, Alabama Ballet and Opera Birmingham while also bringing highly acclaimed artists to our stages via our own series. From student performances, faculty recitals and theatre events, Samford Arts provides entertainment for all ages and tastes.