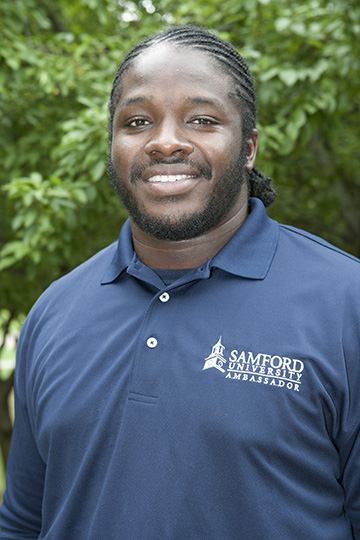 When Samford University received the opportunity to select a recent alumnus to be the university’s nominee for the Council of Christian Colleges and Universities Young Alumni Award, 2013 graduate Jeremy Towns quickly came to mind.

The CCCU Young Alumni Award is given to an individual who has graduated within the last 10 years and has achieved uncommon leadership or success in a way that reflects the values of Christian higher education. Many who know Towns, including Director of Athletics Martin Newton, agree that he is quite deserving of this award.

“J.T.’s greatest quality is that his leadership style is after Jesus,” Newton said. “He is a servant leader, and that is why everyone is so drawn to him — because he serves everybody. Whether it is through football, academics or R.A.N.S.O.M. [a college ministry Towns formed on campus], he just wants to help. I think that is truly his greater quality.”

To win this award, Towns needs your support. Between now and Friday, Oct. 28, you can vote once a day for Towns on the award’s Facebook page.

Mathematics professor Emily Hynds remembers Towns as a freshman. “He was hard to miss — just physically because he was so big — but also, he sat right in the front. He was already so passionate, even as a freshman,” Hynds said.

Upon graduating from Samford in 2013, Towns participated in a tryout camp for the Washington Redskins where he was signed as a free agent. From there, he played for the Buffalo Bills and the Philadelphia Eagles.

“He spent some time in the [National Football League] — which for me, is one of the uncommon paths that he had — but he just used that to keep doing what he’s always been doing: using it as a platform to speak to students, encourage individuals and share his faith,” Hynds said.

Today, Towns is pursuing his medical degree at the University of South Alabama College of Medicine in Mobile.

Samford University strives to be a place where students feel empowered to be leaders among their peers, and oftentimes, as in the case of Towns, they arrive on campus with a natural instinct for leadership.

Towns is one example of the thousands of Samford alumni who selflessly serve their communities and families every day. He is far from the first nor the last student to make an employee say, “I have learned more from J.T. in my five years of being here than J.T. has learned from me. I can promise you that,” Newton said.

Sarah Waller is marketing and communication coordinator for the Office of Alumni Programs.