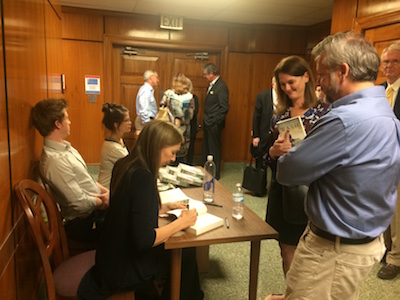 Samford University’s English department hosted author and filmmaker Margaret Wrinkle at the Charles Workman Lecture Oct. 25. Continuing the theme of her creative work, Wrinkle explored how to approach the cultural divide that still exists between black and white.

Born in Birmingham, Alabama, Wrinkle grew up crossing racial boundaries and carrying divided loyalties. She developed a close friendship with Ida Mae Washington, the black woman who took care of her as a child. Washington became ill, and before she died, Wrinkle visited her to hear about her remarkable life, family and stories, many of which inspired Wrinkle’s acclaimed debut novel, Wash.

By speaking to many who experienced slavery or discrimination, and through character development in her novel, Wrinkle learned how to see inside the different points of view and to look back across the divide. “I was learning how to bear walking through uncertainty long enough to arrive somewhere new, see something new,” Wrinkle said.

She heard from those who had been silenced. After hearing an interview with a man who witnessed slave breeding and realizing her own ancestors might have bred slaves, she decided to explore this issue in her story.

Wrinkle crossed the “color line” and shed her “white innocence.” Although society often pretends that the color line does not exist, Wrinkle said ignoring the divide will not lead to a solution.

While studying in South Africa, Wrinkle learned about indigenous thought that focuses on an interconnected, spiritual universe, where ancestors are always present and can be accessed through ceremony, ritual, mediation and prayer. According to this thought, everything that has happened is still with us. This is very different from the modernized European-descended west's world view, which is a chronological, linear and separate, in which the past is only in the past. Because the color line was born in slavery, Wrinkle favors the former approach.

Wrinkle believes that a harmonious balance of the secular and sacred way of seeing and being can bring healing. There must be movement between these two realities that coexist within us because we all have access to both views, she said. The way we choose to see one another can make peace or create conflict, she said, calling it a “sacred task” to fully see one another across the divide to reach the original oneness and re-create the original wholeness.

Olivia Odom is a journalism and mass communication major and a news and feature writer in the Division of Marketing and Communication.