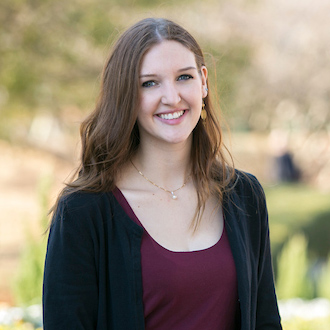 Samford University Communication studies alumna Natalie Bennie ’16 was named a finalist for the Rhodes Scholarships program, the oldest and most prestigious of international academic fellowships.

Each year, the Rhodes program brings to Oxford University 80 international students with the aim of promoting international understanding and peace. American honorees have included celebrated scholars, journalists, diplomats and public officials, including one U.S. president and one U.S. Supreme Court justice.

Although Bennie was not selected for the scholarship at the end of November, to be a finalist is an exceptional honor for students and nominating universities.

“I interviewed alongside 14 of the most qualified, passionate and accomplished students the South has to offer, and am happy to have represented Samford,” Bennie said. “For Samford to have two finalists in a row is really phenomenal.” Samford classics alumnus Sam Hahn ’15 was a Rhodes finalist in 2015.

Bennie, who earned a German minor at Samford, serves as an educator and cultural ambassador, but also keeps her hand in the debate world. “Following the passion I found as a member of the Samford debate team, I also work with English-speaking debate leagues throughout the country,” Bennie said. “This work is not only a personal interest of mine, but also sparked an academic interest in applied linguistics and second language acquisition.” Bennie hopes to pursue research in that that field upon returning to the U.S.

Although some of these scholarships technically are housed in University Fellows, Johnson said approximately half of the student applications for them come from outside the honors program. The advisers work together with other faculty throughout the university to identify and cultivate good candidates as soon as they arrive at Samford. Their increasing success in that work seems to be having the desired effect for the university, as some students now come to Samford with specific international scholarships in mind.

“We need to be the kind of school that people know as having quality international scholarship candidates,” Johnson said. Bennie and many other recent alumni are demonstrating that Samford University really is becoming that kind of school.