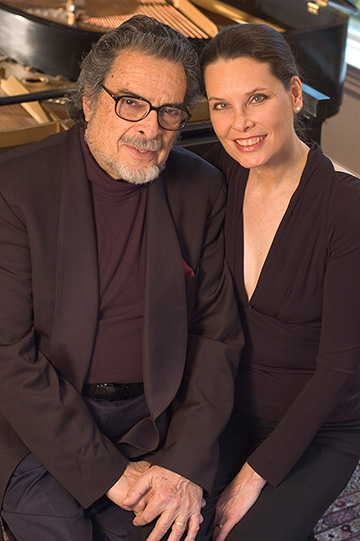 World-renowned pianist Leon Fleisher returns to Samford University Nov. 17 for a special performance celebrating the 10th anniversary of Jane Hollock Brock Recital Hall. He was the inaugural guest artist in the concert hall a decade ago.

Fleisher will perform with his wife, highly acclaimed pianist Katherine Jacobson, in the 7:30 p.m. concert that is part of Samford Arts’ Davis Architects Guest Artist Series.

According to Division of Music Area Coordinator of Keyboard and Professor Don Sanders, “When we began the guest artist series, Fleisher was a unanimous choice among the faculty members, as he is the most important pianist of his generation. Fleisher is the last living pupil of Artur Schnabel, one of the foremost authorities on Beethoven.”

As a recipient of the Kennedy Center Honors in 2007, Fleisher was recognized as a “consummate musician whose career is a testament to the life-affirming power of art.” At age 88, in addition to his teaching at the Peabody Institute of Johns Hopkins University, Fleisher continues with an international schedule of master classes, performances and orchestral guest conducting.

Fleisher and Jacobson will teach a master class to piano students as well as judge the Fletcher and Nell Morris Piano Festival and Competition as part of their visit to Samford. Three Samford undergraduate students are competing this year.

This competition was established by a bequest from the estate of Nell Gandy Morris. The Morrises became interested in Samford’s piano program through their friendship with longtime faculty member Witold Turkiewicz. They provided funding in their estate to establish a competition to encourage high levels of achievement in piano performance.

Martha Thomas of the University of Georgia also will help judge the competition.

Jane Hollock Brock Recital Hall was designed by Davis Architects and is a beautiful 300-seat performance space for the School of the Arts and guest artists. It also is home to the Alabama Symphony Orchestra, Birmingham Chamber Music Society and Opera Birmingham events, as well as the Davis Architects Guest Artist Series.