Class of 1966 Recall Friendships, Faculty That Impacted Their Samford Experience 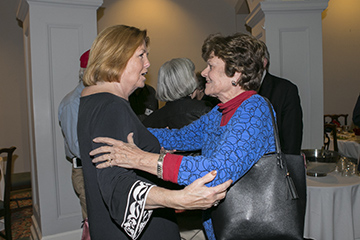 Lasting relationships are a hallmark of the Samford University community, and the strength of enduring friendships was evident during a special homecoming weekend dinner Nov. 12 for the Class of 1966.

About 40 classmates attended a golden reunion dinner on Saturday evening, and reminisced about their favorite Samford experiences and people who influenced their lives.

Conversations focused on how much the campus has changed since their student days. The current campus was fewer than 10 years old, and construction was still everywhere when the Class of 1966 was on campus. They also were students when the school’s name was changed from Howard College to Samford University.

Jack McDonald of Columbia, Tennessee, recalled showing up for English class his first semester and seeing a sign over the classroom door that said “Abandon hope, all ye who enter.” Only later did he learn that the reference to Dante’s Inferno was the class topic for the day.

Clarissa Durrett Strickland of Lilburn, Georgia, recalled how religion professor W.T. Edwards would get easily distracted. “One day in class, he began praying what was obviously a blessing for a meal,” Strickland recalled.

William Armistead of Columbiana, Alabama, recalled how Dean Margaret Sizemore helped him get his first job after graduating. Armistead kept visiting campus because his girlfriend and now wife—the former Emily Golson ’68—was still a student.

“[Dean Sizemore] kept asking me if I had a job yet,” he recalled. She arranged for him to have an interview with a Birmingham businessman, and Armistead ended up working for the company for 17 years.

Ted Jackson of Pike Road, Alabama, drew laughter when he asked if any classmates recalled an incident involving chains and the university’s patrol car. No one would publicly admit to any knowledge of the incident.

Jackson also recalled the influence of history faculty member Wayne Flynt, who was in his first years of teaching at Samford. “He was young and full of enthusiasm and idealism,” Jackson said. “He had an impact on us and has impacted a lot of people in Alabama through the years.”

Clarence and Frances Duncan of Birmingham were one of several multigeneration families celebrating during homecoming. Earlier in the day, the Duncans watched their granddaughter, Caroline Carlisle, as part of the 2016 homecoming court. Caroline is a Samford junior, and her mother, Karen Carlisle ’88, is the Duncans’ daughter.

The Class of 1966 also participated in its first Golden Bulldogs luncheon for graduates of 50 years or more, and had a tent in the alumni tailgate area on Saturday. McDonald and classmates Edward McFerrin of Greenville, Alabama, and Harriott Dixon Calhoun of Trussville, Alabama, were the reunion planning committee.