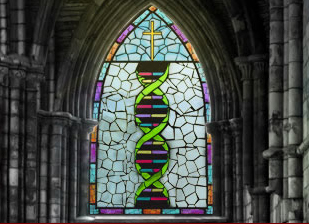 Justin Barrett, Thrive Professor of Developmental Science at Fuller Theological Seminary, presented the latest in a series of lectures hosted by Samford University’s Center for Science and Religion and sponsored by the John Templeton Foundation Oct. 27.

Barrett’s books include Why Would Anyone Believe in God? Cognitive Science, Religion, and Theology: From Human Minds to Divine Minds and Born Believers: The Science of Children’s Religious Belief. He also edited the four-volume collection, Psychology of Religion. At Samford, he described “how religion is natural and why Christians should care.”

The question of why religion is so pervasive is of special interest to Barrett, and he is finding answers in cognitive sciences. In his own studies of children in various cultures, he finds that the minds of even very young children contain a “God-shaped space” that is disposed to a concept of God as a real, super-knowing entity that persists even as notions of parental omnipotence fall away with age and experience.

“It looks like children, just because of the way their minds naturally develop, have this tendency to see the natural world as purposeful in its design, to understand that it takes a god and not humans to account for that design,” Barrett said. Their comfort with invisible friends further aids belief in God.

Barrett also noted that the mind can be said to have both a fast system and a slow system. The former is automatic, intuitive and containing an ancient tool kit that helps us solve problems important to our survival. The latter is more reflective and sometimes more accurate. This is a bit oversimplified, Barret said, because cognitive science reveals that the slow system will accept input from the fast system “until there is good reason to override that impulse.”

To demonstrate his point, Barrett asked his audience to categorize animals based on photos alone. When the nonbiologists in the audience offered the obvious, but incorrect, answers, Barrett explained the obscure technical differences that create the correct groupings. The audience left his lecture knowing the connection between rabbits and horses, but they also understood more about the relationship between these fast and slow systems, and how they shape religious belief. Developing minds are extremely impressionable, Barrett said, but not simply passive sponges.

Humans seem to be bound to religious belief by a common biology, reinforced by the benefits of sharing that experience in community, Barrett said. When these individual experiences become part of public religious rituals, they promote trust within communities, partly because “people who are fearful of watching gods become more cooperative and self-restrained.” That creates more stable societies, which might, in turn, have higher birth rates that perpetuate the whole process.

Barrett knows that such ideas might be seen by some as a challenge to religion, but he said that explanations of how humans believe do not amount to explaining away belief. He recalled the moment in Harry Potter and the Deathly Hallows when the hero meets his mentor in a sort of afterlife. “Is this real or happening inside my head?” Harry asks Dumbledore. “Of course it is happening inside your head, Harry,” the old wizard replies, “but why on earth should that mean that it is not real?”

Ian Hutchinson, Professor of Nuclear Science and Engineering at Massachusetts Institute of Technology, will present the next Samford Science and Religion lecture Nov. 16.