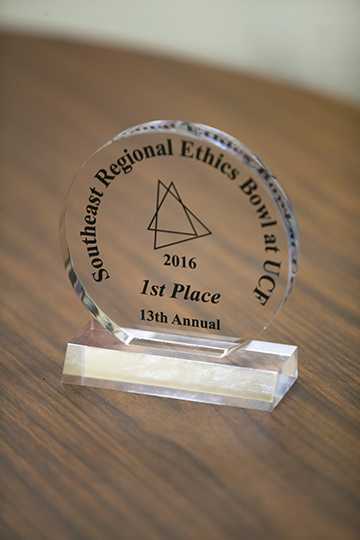 “Ethics Bowl is a University Fellows project that has been around since the beginning of Fellows in 2008,” said Bryan Johnson, one of three team coaches. “For the last three years, we have had a very good team that has stayed cohesive.”

The team spent much of the fall semester preparing for the regional competition, which took place in Orlando, Florida. One of the cases for which it prepared a response was whether or not college students should be able to carry concealed weapons in the classroom, which is legal in the state of Texas.

At the regional competition, the team was given a case that it had reviewed, but it is not told in advance which one it would be. The team makes a 10-minute presentation, and there is a rebuttal by the other team. The team responds to the rebuttal, and the judge proceeds to ask questions.

“We get a lot of praise from others for our preparation,” said Johnson. “In ethics, you get a lot of credit for your demeanor, manners and ethical behavior. We always score highly on how we carry ourselves.”

Senior English and classics major Stone Hendrickson expressed his excitement about the competition. “I’m thrilled to return to the national competition. For most of us, this will be our third consecutive year to compete in the Ethics Bowl together, and we hope to finish strong as seniors.

“Ethics Bowl has given us a unique opportunity to combine competitive debate with current ethical concerns. In order to compete at the national level, we have to research thoroughly, think quickly and communicate effectively as a team. One of our greatest strengths is having a strong core of seniors who know each other and can trust each other in the high-pressure moments of competition.”

Samford beat a number of schools to make it to the national competition, including Santa Fe College, University of Alabama at Birmingham, University of Central Florida and Baltimore University.

“It is clear that we’ve achieved a national reputation for this, and that other teams and coaches want to watch us compete,” said Johnson. “It’s an important part of being a University Fellow because we have curriculum that is grounded in the study of the virtues.”