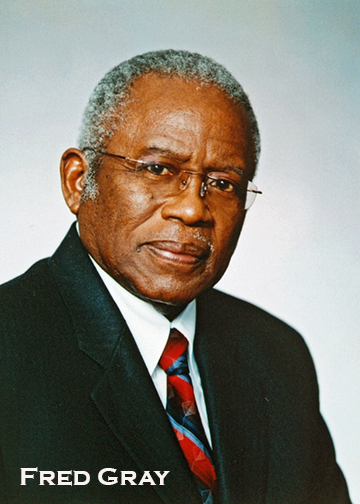 Samford University’s Cumberland School of Law and the Alabama Fellows of the American College of Trial Lawyers will present the Jere F. White Jr. Trial Advocacy Institute Nov. 11, 2016, from 8:30 a.m. to 4:45 p.m. at the Sheraton Hotel in Birmingham.

This year’s institute promises to be a one-of-a-kind program featuring a who’s who of skilled litigators and judges, according to Henry C. Strickland III, Cumberland School of Law dean. Both experienced trial lawyers and those newly admitted to practice will learn practical trial strategies to use immediately.

Civil rights attorney, author and former elected official Fred D. Gray will be the keynote speaker. Gray’s clients have included Martin Luther King Jr. and Rosa Parks. He played a pivotal role in dismantling legal segregation in the state of Alabama. Every attendee will receive a signed copy of Gray’s book, Bus Ride to Justice: The Life and Works of Fred Gray.

The program is preapproved for six hours of CLE credit, including one ethics hour, in Alabama, Florida, Mississippi, Tennessee and Georgia.

The institute serves as the primary fundraising event for the law school’ß most prestigious scholarship, the Jere F. White Jr. Fellowship.

Prior to his death on Oct. 3, 2011, White and his wife, Lyda, established the fellowship, which seeks to recruit outstanding students with strong academic credentials, a history of leadership and a commitment to service, thereby promoting the development of lawyers who share ideals that were so important to White. Each year, the fellowship provides one entering law student with a full-tuition scholarship, an annual stipend, tuition and lodging at the law school’s Cambridge, England, Study Abroad Program, and various mentoring opportunities.

White will be long recognized as one of the most outstanding lawyers in the country, Strickland said. More importantly, he will be remembered as a great person, friend and mentor. A graduate of the University of Georgia and Cumberland School of Law, White was a founding member of Lightfoot, Franklin & White LLC in Birmingham.

White held himself and others to the highest standard of the practice of law, Srtickland added. A third-generation lawyer, he was said to be a true “lawyer’s lawyer.” He cherished his relationship with the bench and lawyers on both sides of the bar, as is evidenced by the respect he garnered from so many in the legal community. White balanced his success as a lawyer with an even stronger devotion to his faith, family, friends and community.