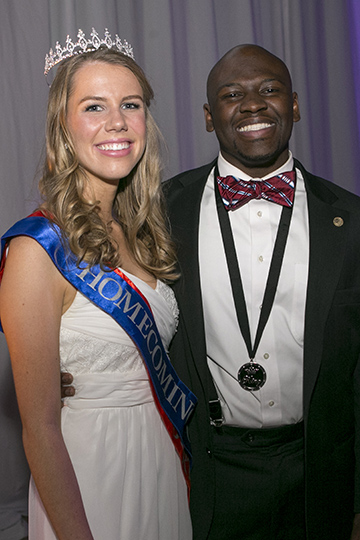 Samford University seniors Margaret Hehir and Micah Green-Holloway were crowned Homecoming Queen and King Nov. 11 during a special ball celebrating the university’s 175th anniversary. They were chosen in a campus-wide vote by the student body.

They also were presented at other homecoming events throughout the weekend, including at halftime of the Samford vs. Mercer football game.

Hehir is a nursing major from Atlanta, Georgia, and Green-Holloway is a management major from Birmingham.

Junior class court members, both from Birmingham, were Caroline Carlisle, a mathematics major, and Nelson Park, a public administration major.

Sophomore representatives were Gracie Groves, a nursing major from Charlotte, North Carolina, and Preston Little, a marketing and entrepreneurship major from Suwanee, Georgia.