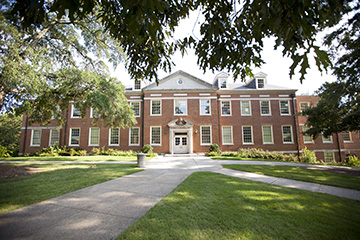 Thomas D. Russell Hall stands tall overlooking the Samford University Quadrangle near Reid Chapel and was one of the first buildings constructed on the current campus after the relocation to Homewood in the 1950s.

Russell Hall currently is the home for the Department of Mathematics and Computer Science. It also housed some offices and classrooms for McWhorter School of Pharmacy until it relocated to the new College of Health Sciences facilities earlier this year. It originally was the home to the Department of Biology until 2002.

The building originally was dedicated in 1957 and named for longtime Samford University trustee Thomas D. Russell. Russell was a major donor to the university over the years and was heavily involved in the campus relocation project. At construction, the building cost $506,222.

After the biology department relocated to the new science building in the early 2000s, Russell Hall underwent a major reconstruction project and was rededicated May 21, 2004. The inside was completely renovated, and it now contains lecture halls, laboratories, conference rooms, offices and other classrooms.

Thomas D. Russell was a member of the founding family of what became Russell Athletics. His father Benjamin Russell founded Russell Mills in 1902 in Alexander City, Alabama. Initially, the company functioned with only 10 sewing machines and eight knitting machines. When Benjamin Russell died, his son, Benjamin C. Russell Jr, became president in 1941. He in 1945 and his brother, Thomas D. Russell, became president and of the family business.

Russell Athletics sold primarily to the military during World War II and created what we now know as the sweatshirt. The company is now global and a wholly-owned subsidiary of Berkshire Hathaway.

For several years, Russell Athletics supplied equipment and apparel for Samford athletics, and Russell apparel can be found in the Samford Bookstore, extending the family’s decades-long connection with the university.

Hidden Gems is part of an occasional series about interesting places, people and things on the Samford University campus.

Olivia Odom is a journalism and mass communication major and a news and feature writer in the Division of Marketing and Communication.