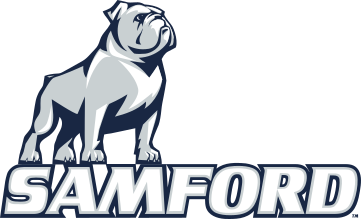 For 175 years, Samford University has been committed to excellence in academics, firmly rooted in its Christian mission. That commitment to excellence also has pervaded Samford athletics for 100 years. Now, Samford’s national reputation is being reinforced with new brand marks that were launched Nov. 12 as part of the university’s 175th anniversary celebration and homecoming weekend.

New spirit marks and an updated bell tower logo emerged from a nearly yearlong study on branding that the university conducted with the help of Seattle, Washington–based Dartlet Inc., according to Betsy Bugg Holloway, Samford’s vice president for marketing and communication and professor of marketing.

The new bulldog spirit mark coincides with the 100th anniversary of the bulldog as the university’s official mascot and replaces a bulldog logo that has been used for about 15 years.

The bell tower symbol, which more formally represents the university and its academic programs, was first developed in the mid-1980s. The bell tower on Samford’s Harwell Goodwin Davis Library is a campus landmark.

Holloway said the branding project with Dartlet engaged over a thousand employees, students and alumni in focus groups and other listening sessions. Dartlet also assisted the university in conducting a branding audit of 12 peer and competitor institutions in higher education, and completed an online survey of hundreds of people in Birmingham, Nashville and Atlanta to assess awareness and perceptions of Samford.

The input from those sessions was used to develop a multilayered branding and reputation strategy across all program areas and communication platforms, Holloway said. The company recommended a number of improvements for both messaging and the university’s visual identity.

“One major goal of this branding project was for us to develop strong and consistent messages about Samford University, our mission and our programs,” Holloway said. “I am grateful to all of the students, fellow employees and alumni who have contributed to this project. We are excited to see these changes implemented over the months ahead.”