Published on November 11, 2016 by William Nunnelley   Share this on: 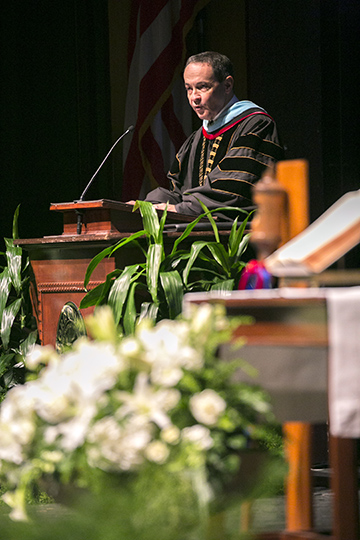 “Is it possible to love a place?” Samford President Andrew Westmoreland asked during his remarks at the university’s 175th anniversary Thanksgiving Convocation Nov. 11. “Buildings and dusty halls and grass and vines and playing fields and faculty offices piled high with ungraded papers and classrooms with imperfect furniture and sidewalks and dirt and trees.

“I lack the philosophical framework to answer the question with the rationality I would prefer,” he said. “All that I know is that, when that place is Samford, I can only say, ‘yes.’ I love this place. And thousands of people across the planet today, many with Samford degrees but many without, would say the same.”

Westmoreland spoke at a program highlighting homecoming weekend for the university. He touched on some high points in Samford history and traced the efforts of past supporters of the university. He described the school as “a place often of meager resources and of financial peril, but always with friends who stood close during times of crisis.”

The convocation began with an academic procession across the campus from Harwell Goodwin Davis Library, “the very heart of these Georgian Colonial buildings that we inhabit, the campus itself a testament to the indomitable will of a man and a woman, Major Davis and his wife, Lena Vail Davis, who did not give up on this place.” Westmoreland said he was convinced that, “absent Major Davis, there might not have been a 175th anniversary of this institution, nor perhaps a 150th, nor even a 125th.”

Davis was a former attorney general of Alabama who was commissioner of internal revenue for the state during the 1930s, when Samford—then Howard College—was suffering from the ill effects of the Great Depression. He was approached by Crawford Johnson, a powerful Birmingham businessman, about becoming president of the struggling college.

In a moving audiotape played for the convocation audience, Davis told the story of how he consented to become the president of Howard. Davis led American troops in the Argonne Forest of France during World War I. Leading his men through a battlefield from which the American casualties had not been removed, he came upon a young officer apparently asleep.

“I went across to wake him,” Davis related on the tape. “When I reached him, I found that he had been killed. In that dramatic moment, I realized that I was traveling in virtual safety because that young man and others like him had given his life to clear the way.

“And in that moment, I resolved that if I should return to my native land, that I would endeavor to serve my God and my fellow man a little better than I had in the past. So while Johnson was talking, I was seeing that young officer. . . .

“As illogical as it might seem as a valid reason on which to base a serious action,” Davis continued, “to me, it was a challenge to keep faith with that resolution, a challenge somehow that I did not dare ignore.”

The tape continues, “So, I accepted.”

Westmoreland also announced that, “because we love it, because it has fulfilled its potential and because so much potential remains,” Samford’s board of trustees had approved launching a capital campaign with a goal of $300 million.

The campaign will “secure scholarship endowment, support and enhance our academic programs, and further create and sustain a physical campus worthy of an institution with a timeless, meaningful mission,” he said.

Almost $40 million in advance commitments have been registered, he said.

“Our needs are great,” he said, “as they always have been, but our gratitude is greater; our friends are ready and willing.”