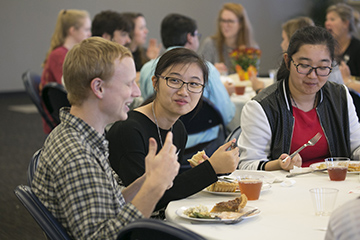 The Samford University community celebrated International Education Week Nov. 14–18 with a series of events coordinated by the Global Engagement Office (GEO). There was a special emphasis on a different continent each day, with various events for students and employees.

“Walk Around the World” was a photo exhibit that was on display all week in Harry’s Coffee House. There were 300 submissions from international students at Samford and students who have studied abroad with Samford.

Students also had opportunities to experience table discussions each day in a different language.

“Cooking Curry” with Dhruv Patel took place on Wednesday. Patel is an international student at Samford studying English in the English Language Learner Institute. He educated students on how to make an authentic Indian dish in addition to sharing cultural information about his home country, India.

“His love of cooking began at around 12 years old as he spent a significant amount of time watching cooking demonstration videos,” Beck said. “He would also observe the chefs when eating at his favorite restaurant, Open Leaf, in Gujarat, India. Over the years, he has perfected his cooking skills and enjoys preparing authentic Indian food for all his friends and family.”

The Cultural Fashion Show took place on Thursday. Student volunteers took the runway and international students educated the audience on the cultural significance behind the clothing. A coffee and dessert reception followed.

There was also a student panel hosted by the African Students Association on Thursday entitled “The Africa That is Not Portrayed on Social Media.” Students led a discussion to help others gain a broad understanding of African culture, pressing issues faced by citizens in their home country and life as an African student at Samford. They then answered questions from the audience.

The week concluded with a traditional Thanksgiving lunch hosted by Student Government Association and the International Club on Friday. The lunch was open to international students and friends. Samford President Andrew Westmoreland addressed the students regarding the significance of this annual celebration.