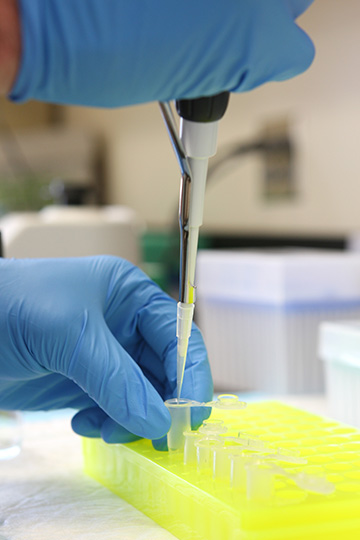 On the second floor of Samford University’s College of Health Sciences, Logan Joiner and Rachel Miller step out of the laboratory with exciting news. They have just completed research that can change the way pediatric cardiac patients receive medication and nutrition.

Pediatric patients in the cardiovascular intensive care unit (CVICU) at Children’s of Alabama often receive numerous medications as well as nutritional support that often requires multiple intravascular (IV) access lines. Clinical management of these multiple lines can complicate medication delivery in addition to putting the patients at an increased risk for infection. Additionally, larger fluid volumes may be required to individually deliver the numerous medications.

The research that Joiner and Miller, along with McWhorter School of Pharmacy faculty members Greg Gorman and Kim Benner, have completed has demonstrated that up to seven specific medications and nutrition can be delivered safely and simultaneously through a single IV access line to pediatric patients. Prior to this research, “potential compatibility issues with administration of these medications and nutrition often resulted in stopping administration of the nutrition while the medications were being delivered,” said Benner.

The study began in the spring semester of 2016 when Joiner was in his final weeks of pharmacy school and was performing research under Gorman. During this time, a CVICU physician approached Benner, who also practices at Children’s of Alabama, regarding this problem. In conjunction with CVICU pharmacist, the two approached Gorman regarding conducting laboratory work to try and solve this problem. While physicians and pharmacists at Children’s identified specific medications and nutrition commonly used in the CVICU, Gorman and Joiner designed and developed the procedures to be used to evaluate their compatibility.

“What makes this research so unique is that we are evaluating up to seven medications along with nutrition all combined together, so we’re getting questions answered that you can’t get from a textbook or other medical literature,” said Gorman.

Now that the compatibility of these multiple medications is known, it can soon begin to benefit pediatric cardiac patients. “We hope that it can eliminate the need to start all those other IV lines,” said Miller. “It’s exciting, because it translates from the lab to the patient immediately.”

The work that Joiner, Miller, Gorman and Benner have done along with physicians and pharmacists at Children’s is not just applicable to the CVICU.

“While it’s going to be applicable to our patients at Children’s, it is also worthy information for pediatric ICU patients all over the world. Other units of the hospital can use this information, too,” Benner said.

The team is compiling, analyzing and writing their findings for publication. They hope to have their work submitted to a peer-reviewed journal by the end of 2016.

Rachel Williams is a journalism and mass communication major and a news and feature writer in the Division of Marketing and Communication.