Samford Theatre to Present ‘Nice Work If You Can Get It’ 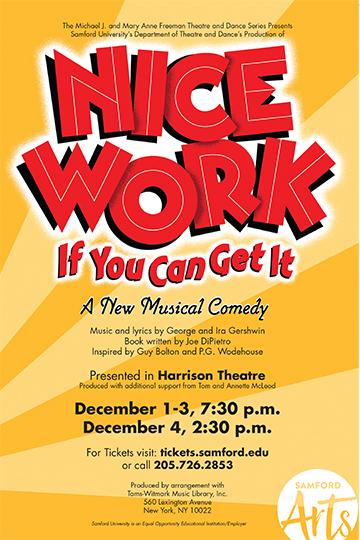 Samford University’s Michael J. and Mary Anne Freeman Theatre and Dance Series will present Nice Work If You Can Get It Dec. 1–4.

The production is a tribute to the Golden Age of musical theatre, according to Mark Castle, who is directing the production.

Nice Work If You Can Get It is set in the 1920s featuring classic songs from George and Ira Gershwin, including  “Fascinating Rhythm,” “Let’s Call the Whole Thing Off,” “I’ve Got a Crush on You” and “Someone to Watch Over Me.”

“It is a piece of pure entertainment,” said Castle. “The idea is to delight and amuse people. There is no particular seriousness in this version of the story. It’s a charming, pleasant piece to make people laugh during this busy time of year.”

This production will showcase the work of talented students training to be professional musicians, actors, singers and technicians in the performing arts, Castle added. Jimmy Winter will be played by Evan Gunter, who is a senior vocal performance and music worship double major from Gadsden, Alabama. Bonny Baker, who is a senior musical theatre major from Mount Juliet, Tennessee, will play the role of Billie Bendix.