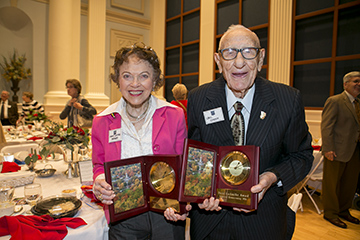 Dozens of Golden Bulldogs reminisced over bottled Coca-Cola with peanuts as they recalled memories of the Samford University they knew from 1966 and earlier. About 80 alumni and guests gathered Friday, Nov. 11, for the annual luncheon that helps kickoff homecoming weekend.

“Welcome to your campus,” Samford President Andrew Westmoreland told the graduates, noting that the 1966 graduates were attending their first luncheon as Golden Bulldogs. “Thank you for a lifetime of commitment to Samford.”

As befitting a reunion that fell on Veterans Day, the David Lockmiller Award recognizing the male present from the earliest graduation year went to U.S. Marine Col. (ret.) Carl Cooper, a member of the Class of 1943. The Vestavia Hills, Alabama, resident served in World War II, Korea and Vietnam. He holds two graduate degrees in education and was a longtime educator in the Birmingham area.

Mary Louise Shirley Hodges of Homewood, also a 1943 graduate, received the Lockmiller Award as the female present from the earliest class. The longtime Samford supporter and 1981 Alumna of the Year recalled the time plaster fell on her head during a French class in a deteriorating building on the East Lake campus. “I am so proud of Samford now,” said Hodges, who attends many Samford events.

Attendees included six 1966 graduates who have been reuniting annually for the past 20 years.

“When we hit about age 52, we decided that we should reconnect on a regular basis,” said Pat Forbus Wingfield, who was joined by classmates Linda Lee Bolen MacKay, Cynthia Deason Sfakianos, Clarissa Durrett Strickland, Linda Glaze Vaughn and Bonnie Barnes Voit.

They made a special effort to attend homecoming this year to help honor a seventh friend, Anne Glaze Stone, who was one year behind them in college. Stone, a 1967 graduate, was honored as a 2016 Alumna of the Year during weekend activities.

The group, who first knew each other through Baptist Student Union and dormitory life, long ago dubbed themselves the SUFines, after a popular rock-and-roll song from the 1960s, “You’re So Fine.”

Harold Hunt, a member of the Class of 1954, and 1950 graduate Xanthi Hahamis enjoyed recalling a 1950s student trip to Europe. “Seven or eight of us boarded a ship in Quebec and sailed to Paris for summer study abroad,” recalled Hunt, who later served many years as theatre department chair at Samford. Hahamis was a pharmacy student who went on to a career in that field.

After the luncheon, while enjoying their nostalgic soft drink and salty nut treat, the graduates admired a vintage 1966 Buick Riviera convertible that was on display outside Brock Recital Hall. The white auto with black interior brought back memories of rides and dates as students or recent graduates.

“It was a really classy car back then,” noted 1961 graduate Peggy Vaughn, a retired pharmacist.