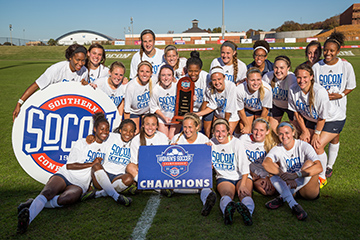 The Samford University soccer Bulldogs continued their historic season by adding the Southern Conference tournament championship to their impressive résumé. The Bulldogs defeated East Tennessee State University, 2-1, on Sunday, Nov. 6, to claim the championship, and with it, the conference’s automatic bid to the NCAA tournament.

The Bulldogs will play 13th-ranked Florida State University Saturday, Nov. 12, at 1 p.m. CST in the first round of the NCAA tournament. The match will be played At the Seminole Soccer Complex in Tallahassee, Florida.

Samford and FSU previously met in the 2011 NCAA Tournament, with the Seminoles taking a 2-0 victory.