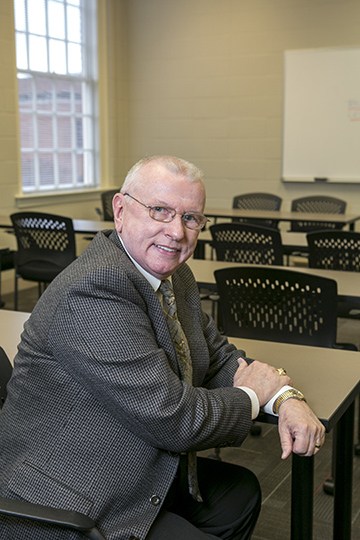 At age 74, M.O. “Buzz” Williams has a bit more life experience than most of the other degree candidates he will march with at Samford University commencement on Saturday, Dec. 17.

The military veteran, who retired from AT&T in 1994 after a 29-year career as an account executive–industry consultant, will receive a master’s degree in secondary education with a concentration in history during 10 a.m. ceremonies in Wright Center.

When most in his age group are enjoying retirement, Williams looks forward to landing a teaching job. Age does not seem to matter to the energetic Williams, who was 72 when he enrolled in Samford’s secondary fifth-year nontraditional master’s program.

“There is no Biblical reference to retirement. As long as you are able, you keep moving forward. Do what you are supposed to do, not what you want to do,” said Williams, who is president and senior consultant at Servant Ministries of Alabama Inc.

Williams’ desire to teach secondary education stems from his long-held interest in helping students value and understand the U.S. Constitution.

“When I was in the military, I took an oath to protect and defend the constitution,” said Williams, who served in the U.S. Navy in the early 1960s. He feels he can do that now by engaging students and helping them understand the importance of the constitution and how to protect it.

He recently completed his student teaching at Spain Park High School in Hoover, where he taught U.S. history to sophomores and juniors. That experience, combined with his graduate studies, underscored an appreciation for the concept of blended learning.

“At Samford, they teach you how to deal with the different ways that students learn,” he said, citing intellectual, physical and emotional factors that can affect how students learn. A blended learning approach to teaching covers all of those bases, he said.

At Spain Park earlier this fall, Williams and his cooperating teacher incorporated blended learning into the classroom via lectures, PowerPoint, research and discovery, and other methods.

“Students get all kinds of opportunities to learn,” Williams said. “The idea is to keep everybody engaged through the teaching process. If you don’t engage them, you lose them.”

Earlier in his career, he taught graduate-level courses in business and financial strategies to AT&T employees, and served as a certified teacher/trainer for an evangelism ministry through his denomination, Presbyterian Church of America.

He has participated in short-term foreign missions as a teacher and evangelist to Jamaica, Russia, Japan, England and Wales. An ordained pastor, he is the author of a book, Disciple Maker, Crisis of Disobedience in the Evangelical Church.

Prior to enrolling in the Samford graduate education program, Williams earned a bachelor’s degree at the university in 2001, receiving the evening program’s James L. Treadway Award for academic excellence and community service. He also holds master’s degrees in biblical studies and religious education from Birmingham Theological Seminary.

Williams and his wife, Carol, have six children, 15 grandchildren and one great-granddaughter. Many of them will be on hand to see him receive his latest degree on Saturday.

“I am abundantly blessed and protected beyond my expectations,” Williams said.