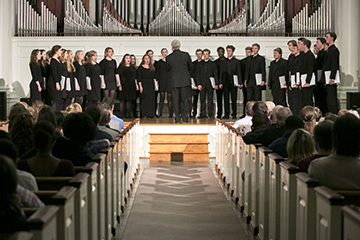 The choir performs Friday, Jan. 27, with the Alabama Symphony Orchestra. The 8 p.m. performance is at Birmingham’s Alys Stephen Center. The choir is directed by Philip Copeland, associate professor of music and director of choral activities. Copeland also leads the Alabama Symphony Chorus.

Friday’s performance previews the upcoming Epiphany vespers service Feb. 3 at 5:30 p.m. in Samford’s Andrew Gerow Hodges Chapel. Both programs feature Leonard Bernstein’s Chichester Psalms. This work is often referred to as West Side Story meets the Book of Psalms. It was commissioned by the Chichester Cathedral in Sussex, England, for its 1965 festival and combines the text from several Psalms sung in Hebrew in the Christian choral tradition.

The A Cappella Choir will have two additional vespers services this spring, including a Lenten service March 3 and an Easter service April 6, both at 5:30 p.m. in Hodges Chapel.

A final highlight to the choral season will be the Samford combined choirs’ performance with the Alabama Symphony March 31 and April 1 at Alys Stephen Center. Carlos Izcaray, the ASO’s music director, will conduct the symphony along with guest artists, the ASO Chorus, and choruses from area colleges and universities.

Copeland praises the symphony, especially the work of Izcaray. “The ASO’s Carlos Izcaray is a brilliant conductor. Whether it is this Friday or another event, you need to hear what he can get out of a professional orchestra or a chorus,” he said.

Samford’s School of the Arts provides its students with opportunities to perform across the globe. From local performances like these to international competitions, students gain exposure to professional musicians and artists. The Birmingham community has a thriving arts scene, and Samford continues to play an important role in providing performances and sharing talent with local patrons.