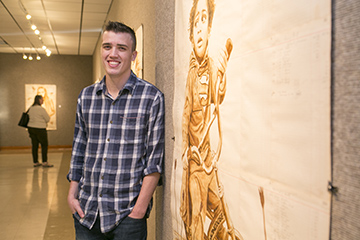 Michael Aaron Williams shares his works with Samford Arts as part of the yearlong alumni retrospective in Samford’s Art Gallery. A 2011 graduate, Williams’ artwork will be featured Jan. 24–Feb. 23.

His art has been shown extensively in this country and abroad. This exhibition highlights coffee paintings on century-old ledger paper that came from his great-great-grandparents’ store in Appalachia. “The ledger paper provides an authentic historical context,” said Williams. He experimented with numerous media and realized that coffee worked best as it had a “melting quality and natural feel.”

Many of the pieces are recent works and have never been seen publicly. “Many of my subjects are like Frankenstein, using bits and pieces of different people and things to create a narrative,” he said.

Several works are mirrored images reflecting recent political struggles, depicting animals or people fighting themselves. His love of nature plays a big role in his paintings as well.

Williams said he is excited to be back at Samford. He earned a Master of Fine Arts from Washington University in St. Louis, Missouri, and now resides in Knoxville, Tennessee, with his wife and son.

While discussing his time at Samford, Williams explained how he received international acclaim for his talent. “Daniel House is Samford’s hidden jewel,” he said. “While I was studying there, I was able to participate in an exhibit in Rome, where I gained recognition. This exposure helped launch my career.”

Williams said he has enjoyed meeting students and catching up with faculty members.

School of the Arts dean Joseph Hopkins added, “Samford’s students and alumni are making an impact nationally and internationally with their talents. We are always thrilled to have the opportunity to host an alumnus on campus, allowing current students that interaction and vision of what their future might hold.”

The Samford Art Gallery is open Monday–Friday, 9 a.m.–4 p.m., and is located in Swearingen Hall. Admission is free.