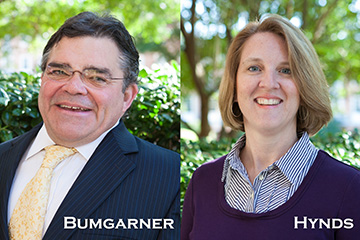 Two veteran Samford University faculty members were honored with two of the university’s highest honors Jan. 24 at the opening convocation of the spring semester.

The late Gary Bumgarner posthumously received the George Macon Memorial Award for teaching. Bumgarner, who was associate professor of pharmaceutical, social and administrative sciences, died unexpectedly in September. He had taught at Samford since 2001.

Emily Hynds, associate professor of mathematics and computer science, received the Jennings B. Marshall Award for University Service. She joined the faculty in 2000 and also serves as department chair.

The Macon Award is presented each spring to a faculty member who demonstrates the ability to inspire students to greatness. Roy L. Smart, a member of the Class of 1917, established this award in 1976—a full 60 years after he was a student in George Macon’s classes—in recognition of the enduring influence an inspiring teacher can have on students.

Bumgarner’s sister Kathy Van Pelt received the award on her brother’s behalf. The accompanying $1,000 award is being donated to the Dr. Gary L. Bumgarner Legacy Scholarship in Samford’s McWhorter School of Pharmacy.

In announcing the award to Bumgarner, Samford Provost J. Michael Hardin said, “He developed this challenging course into a unique format that merged active learning with group-based problem solving.

“Gary impacted student learning and personal and professional growth beyond the classroom. He was available after hours and on weekends to help students who were struggling with this demanding subject. He encouraged them to participate in expansive training and professional development.”

The cocurricular events were so popular that the pharmacy student body created “The Bumgarner Cup” to recognize the overall best class in the school.

“Gary helped students make the head-to-heart connection,” Hardin added. “He challenged students to thing beyond only drug knowledge and complex equations by assigning classic literature on ethics and professionalism. His goal was to help student embrace the profession of pharmacy as a calling to serve.”

The Marshall Award, named for a longtime business school faculty member, was created in 2009 to honor full-time faculty members who “have made significant and sustained service contributions to the university during their career at Samford.”

Hardin noted Hynds’ devotion to Samford is “evidenced by her consistent and continual involvement in a wide variety of service activities that are critical to fulfilling the university’s mission.”

In addition to being a popular classroom teacher, she has served on many university-wide committees and within Howard College of Arts and Sciences. She also sponsors undergraduate research and served as coordinator of the faculty mentoring program.

Hardin also noted that her “heart for, and commitment to, student-athletes” is reflected in her enthusiastic leadership as faculty athletics representative.

The convocation highlighted the university’s 175th anniversary with a special focus on teaching and scholarship.