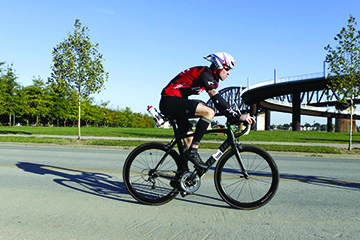 Brock School of Business graduate Bill Anderson has learned how to test his endurance in life: get serious about training for the Ironman Triathlon. The Ironman offers competition annually in three events: a 2.4-mile swim, 112-mile bike ride and 26.2 mile run. To be competitive in the triathlon requires months of training. It helps to have an employer that sees the value in such an activity.

“I got into the Ironman Triathlon because I wanted to stay in shape,” the 2007 accounting major said. “I began doing shorter distance triathlons in 2010 and participated in a couple of events a year during the winter, an accountant’s busiest time of the year, to help me stay motivated and keep active.”

Anderson said training for the Ironman required “a huge time commitment, often six days a week and multiple hours a day.” The triathlon, described on its website as a test of physical toughness and mental strength, was held in Louisville, Kentucky, in October.

Anderson’s employer, PricewaterhouseCoopers, supported his quest. The company has a core value system that promotes and believes in flexibility and creating a work-life balance atmosphere for its employees, said Anderson. The company also allowed him to work from any place and at any time to fit in all of his responsibilities.

While juggling his work assignments and multiple hours of training six days a week, Anderson and his wife, Tyler Foltz, a 2008 Samford education graduate, also greeted their first child.

“Brock School of Business is where I first began to focus and work on my time management skills,” Anderson said. “The school was instrumental in helping me set and achieve goals, and gave me tools for success in my career at PwC and life.”

So how did Anderson fare after months of focusing on the arduous event? He finished the race in 13 hours and 40 minutes, which placed him close to the midpoint of the event’s more than 2,600 competitors.

“I flew through the swim and bike, and suffered on the marathon portion,” he said. “It was a long day, but it was an amazing experience. I was able to complete something so difficult to prove that I could do it.”

Kara Kennedy is director of external relations for Brock School of Business.