Published on February 6, 2017 by William Nunnelley   Share this on: 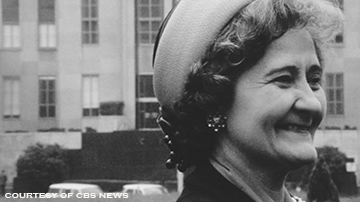 Nina Miglionico, a 1933 graduate of Samford University, was revered as an activist for social justice and was the first woman to serve on the Birmingham City Council. She was elected to the council in 1963, and one of her first acts was to vote to repeal Birmingham’s segregation ordinances.

After graduating as valedictorian of her Samford class, she attended the University of Alabama Law School and became a lawyer. She ultimately practiced for 73 years, until her death in 2009, advocating for women to serve on juries and for other progressive causes such as child labor laws, prison reform and elimination of the poll tax.

Alabama Public Television (APT) will air a documentary, Stand Up, Speak Out—The Nina Miglionico Story,  Sunday, Feb. 19, at 5 p.m. and Thursday, Feb. 23, at 8 p.m. The hour-long film was produced and directed by Jenna Bedsole, a practicing attorney with the firm of Baker, Donelson, Bearman, Caldwell & Berkowitz.

“She practiced law during a time when there weren’t many women in the field,” Bedsole told Super Lawyers magazine. “Her strength and courage really inspired me.”

Miglionico was elected to Birmingham’s first City Council, voted in after the city changed its form of government to moderate its violent opposition to the Civil Rights Movement. Her unflinching stance against segregation made her a target. In 1965, just before her first reelection, a dynamite bomb was left on her front porch. Later, the Ku Klux Klan burned a cross in her front yard. She was a member of the council for 23 years, becoming the first woman to serve as its president in 1978.

Miglionico also served as president of the Alabama League of Municipalities and the National Association of Women Lawyers. She received the Margaret Brent Award from the American Bar Association given to outstanding women lawyers in the U.S., and was chosen Birmingham Woman of the Year. She was named Samford’s Alumna of the Year in 1970.