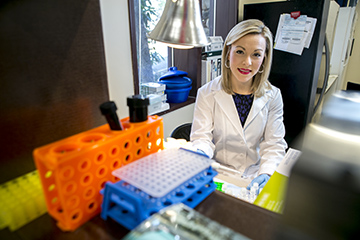 Within Samford University’s Department of Nutrition and Dietetics, faculty are paving the way for students to expand their knowledge of scientific research by connecting what they learn in a textbook with what is taking place in the lab through their own research experience.

Before nutrition and dietetics professor Katie Coate joined the School of Public Health faculty in fall 2015, she was finishing a postdoctoral fellowship at the University of Texas Southwestern Medical Center in a lab that almost exclusively studied a metabolic stress hormone known as Fibroblast Growth Factor 21, or FGF21. The hormone has accumulated interest amongst researchers over the past decade due to its discovered pharmacological effects in the treatment of obesity and diabetes.

After four years of research, Coate admits that her final discoveries have limited connections to her original hypothesis. “As research can go, my discoveries had absolutely nothing to do with the role the [FGF21] hormone had in treating obesity and diabetes. There is no way that I could have planned to go down this path, but my mentor always told me, ‘Go where the data leads you,’” Coate said.

By following her data, Coate and a team of student researchers discovered a new function for FGF21 in the exocrine pancreas.

To understand her research, one needs to understand the importance of digestive enzymes. Every time a person consumes a meal or a snack, the body tells its pancreas to release digestive enzymes to break down the food that was consumed. Until this point, the known hormone that communicated this need to the pancreas was called Cholecystokinin, or CCK.

Through a series of experiments, Coate found that FGF21 performs an almost identical function, providing a second requisite pathway that stimulates digestive enzyme secretion. With this discovery, Coate said a question began to direct her research: Why does the body have two hormones that do the exact same thing?

Using mouse genetics, Coate and her team discovered the difference that will have implications in the future study of physiology of nutrient digestion and absorption.

Both CCK and FGF21 promote pancreatic secretion, but unlike FGF21, CCK additionally stimulates protein synthesis in the pancreas. Protein synthesis can cause pancreatic cells to become stressed, but FGF21 comes to the rescue by mitigating that stress. This feature actually reduces the burden that is placed on pancreatic cells, protecting them each time a person consumes a meal.

“These findings open the door for potential treatment of conditions like pancreatitis and cystic fibrosis. We now know that FGF21 not only stimulates enzyme secretion, but also protects pancreatic cells from protein-folding stress, thereby alleviating some of the burden that these digestive enzymes place on pancreatic acinar cells,” Coate said. “There is so much potential opportunity down the road.”

Now with her research complete and its findings published in Cell Metabolism, a top-tier journal that focuses on basic and clinical metabolic research, Coate focuses on translating her research experience for the students in her classroom.

“I think it helps to have research experience because I can teach students where new knowledge comes from,” Coate said. “I like to foster inquisitive research minds in my students because I want them to know that research is not a far-off crazy concept that only a select few with lab coats can do. Every single day, we should be asking questions—why is this process occurring, how is this happening—and developing a mindset that questions what you are learning to gain a deeper meaning.

“That is how discovery and innovation begins, and I think it is so much fun.”