Published on February 8, 2017 by William Nunnelley   Share this on: 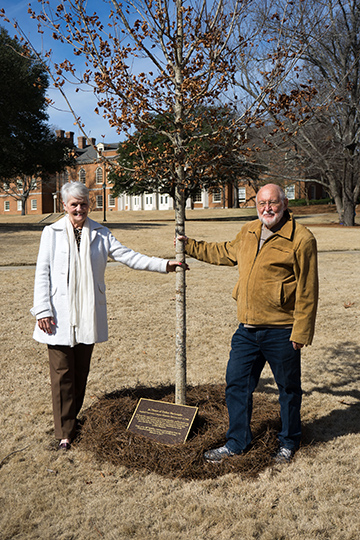 In January of 1975, campus ministries director Esther Burroughs led a mission trip for Samford University students to the Lower East Side of New York City. Burroughs and the students spent 10 days renovating a small storefront, transforming it into a community center that grew into the East Seventh Street Baptist Church.

“We painted, cleaned, reworked it, built a puppet stage and prepared it for a weekday ministry,” recalled Lynn Smith, one of 19 students on the trip, several years ago. They named it Graffiti because that’s what was on the walls of the surrounding neighborhood. Later, the church took the name Graffiti Ministries, and the students came to be known as the Graffiti Gang.

On Feb. 4 of this year, some of the former students honored Burroughs for her years of service. With the help of Samford President Andrew Westmoreland, the group surprised their former campus ministries director with a tree-planting on the quad and a luncheon in her honor on the eve of her 80th birthday Feb. 6. The tree is a Canadian sugar maple, “an appropriate choice to honor Esther since she was born in Alberta, Canada,” said group member Paul Garrard.

“Esther touched so many lives of students while she was here, not just the Graffiti Gang,” said Dick Bodenhamer, another member. Eight members of the group joined Burroughs’ friends and family at a luncheon in the Howard Room of Beeson University Center.

“You are certainly family to me,” said Burroughs at the tree-planting. “You changed my life. You helped me grow in my walk with the Lord and helped my faith to expand.

“I recall our traveling on the subway to the work site, with our saws and hammers, singing. People must have thought we were crazy.”

Burroughs said it was the most special birthday she had ever had. “It was a very humbling moment,” she said, adding that the tree is “a symbol of the growth of life and ministry.”

Taylor Field, pastor of the New York City church, telephoned during the luncheon to wish Burroughs well. He reported that the church has started 14 satellite churches, 57 start-up churches and has baptized more than 900 people since the building was renovated by the Samford group.

“Lives have been changed not only among that Graffiti group but literally all over the world,” said Bob Burroughs, Esther’s husband.

The Graffiti Gang held its first reunion in 2005, when members gathered in New York City at the site of their mission trip 30 years earlier. They were “humbled” at the transformation that had occurred in the neighborhood, and at the growth of Graffiti Ministries, said Garrard at a 40th anniversary reunion in 2015 at Samford.

Burroughs served as Samford’s campus ministries director from 1971 until 1980. Her husband, a composer and church musician, served on the music school faculty at the same time. They now reside in Greer, South Carolina.