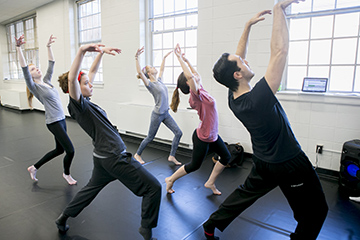 Samford University Dance continues to show growth and new excitement. Samford Dance began more than a decade ago and grew out of a student-driven interest in dance as part of the college education experience. This inclusive program is based in the School of the Arts but is open to students throughout the Samford community.

As part of its repertoire, the dance company’s spring concert is scheduled for Feb. 16–18 at 7:30 p.m. in Harrison Theatre. Birmingham arts patrons Michael J. and Mary Anne Freeman have been longtime supporters of the School of the Arts, and sponsor the theatre and dance series each year.

“The School of the Arts is fortunate to have such generous donors to make our programs possible,” said Don Sandley, Department of Theatre and Dance chair.

This year’s concert, “Elements,” will explore a variety of choreographed interpretations of the title, including water and fire. Clayton Winters, assistant professor and director of the dance program, and two associate choreographers, Jessie Winters and Alisa McCool, are developing six original pieces.

Not only is Samford Dance experiencing growth, it also has opened two new studios in Seibert Hall for the spring semester. These first on-campus dance studios make the dance program even more accessible to all students. Winters anticipates the vibrant program will continue to gain momentum and attract even more students now that classes can take place on campus.

The rehearsal studios will be named for former Samford student and adjunct choreographer Julie Averett Phillips, who died recently.

Sandley said, “Her advocacy for dance as an element of worship and faith expression was instrumental in opening doors for dance in our university curriculum.”

According to William Bugg, former professor of music, “Having a dedicated space in Julie’s memory has received ongoing support from so many family and friends. It is a testament to her love of Samford and the dance program.”

For concert tickets, go to tickets.samford.edu. To donate to the studio fund in memory of Julie Averett Phillips, contact Claude Rhea at chrhea@samford.edu.