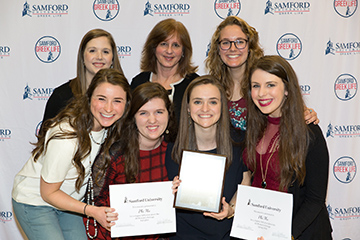 “It’s an exciting time to recognize all chapters for their continuous hard work,” said Julie Fletcher, director of greek life. “All 15 chapters at Samford are striving for excellence, and I am grateful we are able to come together and celebrate their accomplishments. The Samford greeks are inspiring and encouraging! I am hopeful that 2017 will be an even better year for our community.”

Alpha Tau Omega was named Chapter of the Year.

“It’s amazing to see the growth of those men since they are the newest fraternity on campus,” Fletcher said.

William Hargrove, a senior political science major from Luka, Mississippi, was named Greek Man of the Year. Hargrove is a member of Alpha Tau Omega.

Lauren Hammond, a student in McWhorter School of Pharmacy from Huntsville, Alabama, was named Greek Woman of the Year. Hammond is a member of Alpha Delta Pi and served as chapter president last year.

The Outstanding Interfraternal Relations awards were given to Alpha Phi Alpha Sorority and Phi Mu. Excellence in Values was awarded to Alpha Omicron Pi and Alpha Tau Omega.