Published on February 22, 2017 by William Nunnelley   Share this on: 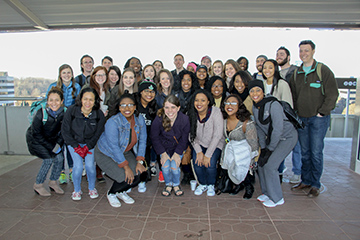 Samford University student David Cronin traveled to the new Smithsonian Museum of African American History and Culture in Washington Feb. 17. He said he was grateful for the opportunity because it allowed him to go beyond the pages of a book and the images on a movie screen.

“I was able to experience history,” he said.

Cronin was one of 30 Samford students who participated in the trip as part of the university’s Black History Month celebration. Samford’s Office of Diversity and Intercultural Initiatives and the Mann Center for Ethics and Leadership sponsored the trip.

“Walking through the national mall, you realize that America is made from interactions of all people, of all origins, who have had an effect on the growth and change that has occurred in our country to get us where we are today,” said Caitlin Meyer.

“This museum was a great opportunity for people to learn and open up their perspective on racial tension in America.”

Savannah Weatherell said “the depth of the exhibitions prompted a beautifully open dialogue on white-black relations as we wrestled without mixed feelings.”

Allie Woodside added, “Even though African Americans have come so far, there is still much more to be done,” and said “my generation will be the next generation to stand up and fight.”

Ben Hewitt noted that it was important to study slavery and civil rights issues “so we can prevent those things from happening again.”

Denise Gregory, Office of Diversity and Intercultural Initiatives director, said the trip provided “a great opportunity for our students to partake in the cultural experiences and achievements of African Americans, and to be inspired not only to celebrate different cultures, but to honor the richness they bring to our world.”

Mann Center director Drayton Nabers said it was important for students to understand “how American values like resiliency, optimism and spirituality are reflected in African American history and culture.”

In addition to the museum, the students visited other Washington historical sites before returning to Birmingham.

The museum opened in September of 2016.

Jenee Spencer in the Office of Diversity and Intercultural Initiatives also provided reporting for this story.