Published on February 7, 2017 by William Nunnelley   Share this on: 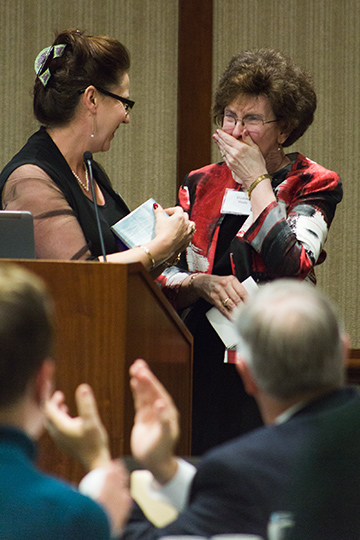 Samford University has established the first endowment fund for its Davis Library Special Collection and Archives Department and named it for Elizabeth Wells, who directed the archival program for almost 40 years.

The Elizabeth Wells Special Collection Endowment Fund was announced at a White Glove Event Jan. 31 that was part of Samford’s 175th anniversary celebration. The fund is also part of the $300 million Forever Samford fundraising campaign. Contributions can be made online or sent to Samford University Advancement, 800 Lakeshore Drive, Birmingham, AL 35229.

Wells joined Samford in 1975 and served as chair of the Special Collection and Archives Department for 38 years. She retired in 2015.

“Liz Wells has cultivated the Samford Special Collection and Archives for 40 years,” said Kim Herndon, dean of the Samford library. “Her stewardship and commitment to preserving and sharing the stories of Samford, Alabama Baptists and Alabama have helped make Samford's Special Collection and Archives known and utilized by researchers and scholars from the southeast and the nation. This fund will help ensure ongoing preservation of the donated treasures given to the collection to be shared far into the future.”

The White Glove Event enabled guests to see some of the Special Collection’s rarest items including an original manuscript from British pastor Charles Spurgeon, a 16th century Geneva Bible, a volume of The Saint John’s Bible, a draft of Martin Luther King’s Letter from the Birmingham Jail and early Alabama and Baptist records.